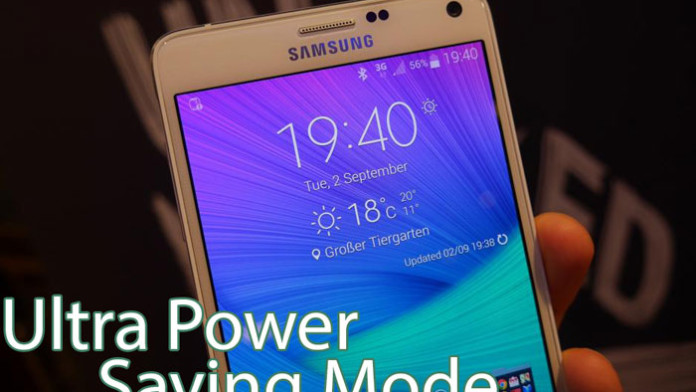 Along hardware specifications, the Samsung Galaxy Note 4 shines when it comes to software features. It is unrivalled when it comes to features. Options like multi window, multitasking capabilities and more make the phone unique and it is nothing like we are used to seeing.

Samsung puts a lot of features on its devices. One of the recent releases is Ultra Power Saving Mode. UPSM is a battery saving option for Touchwiz devices that can make the phone last for the entire day with just 10 percent of battery left.

This is made possible by making the screen only black and white, disabling all background activities and allowing only most important apps to run.

This feature was introduced first on the Samsung Galaxy S5. Even though the S5 only has a 2800 mAh battery, all the software optimizations that Samsung did coupled with Ultra Power Saving Mode, made the battery life excellent, unrivalled by no other phone in the market, iOS or Android.

The Samsung Galaxy Note 4 also has this feature. It is similar to the Galaxy S5 one but some users say that is better. Battery lasts longer and doesn’t drain quickly.

The app (zip file) of Galaxy Note 4 Ultra Power Saving Mode has been extracted from the system dump and has been ported to other Samsung Galaxy devices. Even though it hasn’t been optimized by developers, users are reporting that it works on the following devices:

Note that users have tested the Ultra Power Saving Mode on Android 4.4.4 KitKat custom ROMs. It is not certain that it will work on your phone but it is a good idea to give it a shot.