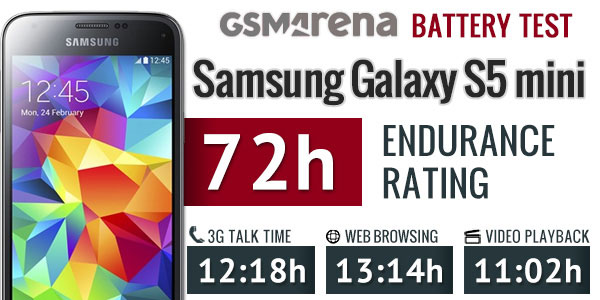 Here are the results of Samsung Galaxy S5 mini battery life test. The Galaxy S5 mini, as the name suggests, is the mini version of Samsung’s current flagship, the Galaxy S5. The mini has all the features of its big brother like the water-resistant and dust proof capabilities, fingerprint sensor and also heart rate monitor on the back of the phone near the LED flash.

How does the Mini fair in a battery life test? It really has a smaller battery but it also has a smaller display with lower resolution and slower processor. Can it beat its big brother which has one of the best battery lives for a smartphone? Well, the test has been already done and the results are out. Let’s see how the phone has performed.

The battery life test consists of three parts: Web browsing, talk time and video playback. On the web browsing test, the Samsung Galaxy S5 mini scored 13 hours and 14 minutes which is impressive. It scored 4 hours more than its bigger brother and 7 hours more than the LG G3. The small 4.5″ Super AMOLED screen really makes the difference.

Video playback, the last test, wasn’t very bad at all. The mini managed to get 11 hours and 2 minutes, only 3 minutes less than its big brother. Overall, the Galaxy S5 mini has decent battery life and will definitely be enough to last the whole day with normal usage, especially with Ultra Power Saving mode on.

Is the Nexus 5 Battery Life Good and Does It Last Long?