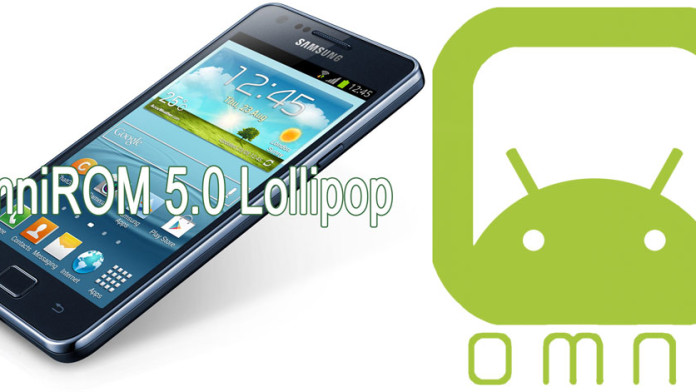 Download and install OmniROM 5.0 based on Android 5.0 Lollipop on your Samsung Galaxy S2. If there’s only one reason why Android is so popular today is because of the Samsung Galaxy S2. When the S2 was released, it had Android 2.3 Gingerbread.

At that time, Android wasn’t as popular as today. back in 2011, dual core processor clocked at 1.2 GHz, 1 GB RAM, 8 MP camera and Super AMOLED display were specifications that only the Galaxy S2 had. At that time, there was no competition and that allowed Samsung to sell more than 20 million units.

Also Read: How To Get Galaxy S5 Theme On Galaxy S2

This explains why the Samsung Galaxy S2 is so popular even after 3 years of being released. There are still millions of people using the phone and the support has always been great. The best thing is that developers are still creating ROMs for the phone, even though it is more than 3 years old.

You can see all these articles about CyanogenMod 12 unofficial builds getting released for many smartphones like Galaxy S3, Galaxy S4, Galaxy S5, HTC One M8 and Xperia. But the first ROM that was able to create a working build of Android 5.0 Lollipop was OmniROM. And today, OmniROM comes with a great news for all Galaxy S2 GT-I9100 users.

OmniROM based on 5.0 Lollipop has come the Galaxy S2. Even though the phone doesn’t have the best specifications, it is still able to run Lollipop fine without any major problems. That is a big surprise considering that Samsung never updated the phone to 4.4 KitKat, let alone Lollipop.

But thanks to the amazing developers, everyone who has a Galaxy S2 GT-I9100 variant, can install OmniROM and enjoy Lollipop OS.

The developer says that it is quite a stable build considering that is the first version, but it isn’t stable enough as a daily driver. Camera, bluetooth, kernel, vibration, sound, recovery and RIL are all working. But there are a few apps that aren’t working at the moment.

How to install OmniROM Android 5.0 Lollipop ROM on the Samsung Galaxy S2 GT-I9100

Once you flash Gapps, reboot your phone. First boot will take a few minutes because the new OS version is being optimized.