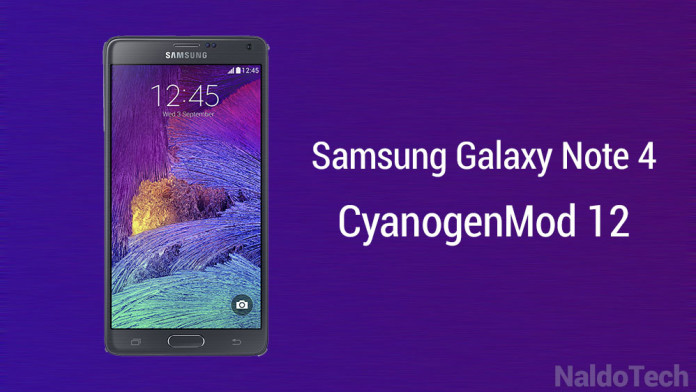 The CyanogenMod team has expanded its roots to another device, the Samsung Galaxy Note 4. CyanogenMod has come a long way since its original release, becoming one of the most popular custom ROMs for Android devices.

CM12 has been on the market for many years, but it took off when Android 2.3 Gingerbread got released and users needed a faster experience. Today, Android 5.0 Lollipop is here with new features, better performance and increased battery life. Whatever stock 5.0 Lollipop is good at, CyanogenMod 12 is better.

After a long time of waiting, Galaxy Note 4 users can now enjoy official CM12 builds on their devices. The ROM is based on Android 5.0.2 Lollipop, the latest version at the moment. It includes all the features of stock Lollipop firmware and extra ones, such as built-in theme engine for enhanced customization and performance profile.

The Galaxy Note 4, even though it had a lot of success selling millions of devices, developers haven’t been quite active with this device. There are ROMs, but certainly not as good and frequently updated as on the other flagship Samsung device, the Galaxy S5.

Fortunately, CyanogenMod 12 is officially released by the CyanogenMod team and not by an enthusiast developer. This means that all builds are considered nightlies, where most of the things are working with the exception of some small issues. New builds with bug fixes are released almost everyday.

At the moment, CyanogenMod 12 is available only for trltetmo, which is the variant with the Qualcomm Snapdragon processor. There is still no news whether the Exynos variant will get it or not.

Reboot your phone and enjoy stock Android 5.0 Lollipop experience on your Samsung Galaxy Note 4 thanks to CM12 custom ROM.