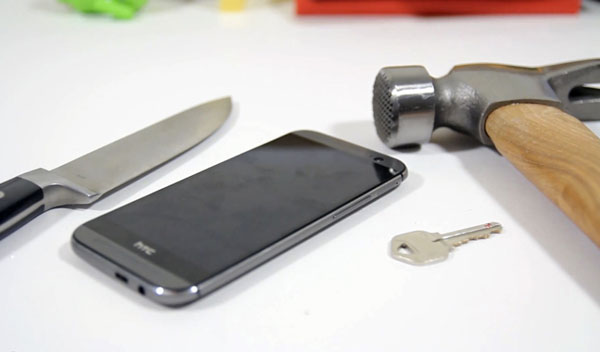 The HTC One M8 has been put under the torture test. It has gone through some of the worst tests such as Water, Drop and Hammer test. Did it survive this torture?

The all new HTC One M8, just like its predecessor, is completely built out of aluminum. It is very sturdy and when you hold it with your hands, it gives you the feel like it is but like a tank. And it really is. No cheap parts, no pieces that creak and it doesn’t scuff easily. This torture test puts it in its limits.

The easiest and less brutal test is the water test. The new HTC gets put in a bowl of water not for a minute nor for ten minutes but for full one hour and 30 minutes After being submerged foe such a long time, everybody might think that the phone is already dead. But for our surprise, it survived. Not only that, but after letting it dry for a few minutes, no evidence of water was found on the body as well as inside the screen. This shows that if you suddenly drop your M8 in bathroom’s sink, it will be fine.

The next challenge is drop test. This is the part where the beautiful body of HTC’s flagship device get destroyed, scratched and scuffed. It wasn’t alone. It’s old brother, the M7 also got to taste the drop test. As expected, they both got huge nicks and scratches  when they got dropped on the back and sides. The good thing is that they survived both when they got dropped face down. This is a good news for the M8, considering how difficult it is to repair it.

The last challenge, the Hammer Test was the worst one which totally destroyed the new HTC One. The first attempts trying to scratch the back of the phone went pretty well. Of course, a key was used. The scratches were very easy to disappear. However, with a knife, the scratches didn’t go away. 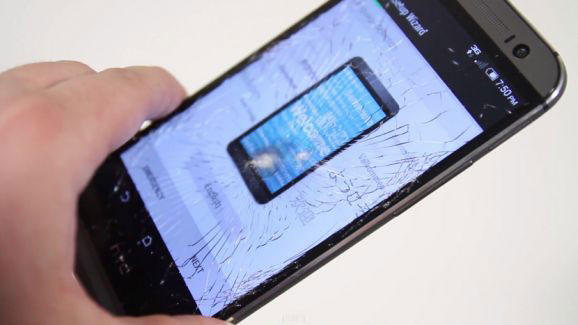 They stayed there as the knife actually broke into the silver coating. Then, the hammer completely destroyed the M8. First, the back cover durability was tested. The first hits were very weak and didn’t really do any damages but when the hits got stronger, the back cover was really damaged with nicks and dents. Then, it was time for the front screen. A couple of hits totally shattered it.

Watch Drop Test here, Hammer Test here and Water Test here. What do you think of these challenges?