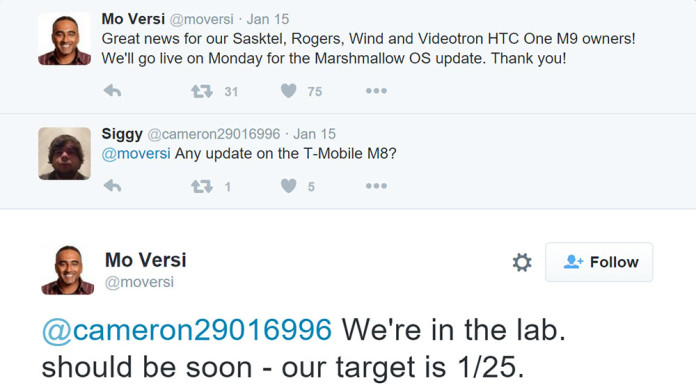 On another tweet, Mo Versi has declared that the T-Mobile variant of the HTC One M8 will be getting the taste of Marshmallow at the end of January. To be more specific, the Marshmallow update is executed to roll out in just one week from now.

Mo Versi who is the vice president of product management of HTC has declared that their aim for the Marshmallow release is 25 January 2016. In other words, HTC One M8 owners should be getting the update next week.

This is the next update for the One M8, going from Android 5.0.1 Lollipop to Android 6.0 Marshmallow. This is the second update for this phone after Lollipop and 4.4.2 KitKat. This update is valid for carrier-branded units only. Unlocked HTC One M8 devices have enjoyed Marshmallow since December of 2015.

The HTC One M8 is the successor of the HTC One M7. It comes with a Full HD 5-inch Super LCD3 display, Snapdragon 801 chipset, 2 GB RAM, dual 4 MP cameras and a non-removable 2600 mAh battery.

The Marshmallow update is expected to bring a list of key changes and software enhancements.

Project Doze: A project designed to improve battery life by suspending unnecessary services and putting apps on standby when they are not in use.

Permissions: The permissions system has also changed. Now you get to choose what kind of permissions each app can access. You can decide if you want to allow or deny access to certain permissions. This is a key feature for improved security.

Google Now on Tap: Searching has never been easier with Google Now on Tap. This is a new feature which scans the info currently displayed on the phone and then searches for the most relevant term on Google.

Other improvements include performance optimizations and better SD card handling.

Besides T-Mobile HTC One M8, HTC One M9 owners who are with Sasktel, Rogers, Wind and Videotron are also going to receive Marshmallow very soon. To make sure you are running on the latest version, go to Settings > About Phone and check for any available software updates.