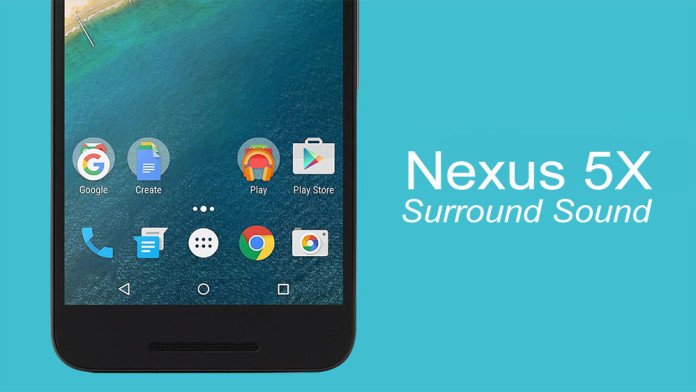 Surround sound mod is an old system modification for Android devices which gives the illussion of sound coming from multiple places, often called surround sound. Most Android devices including the Google Nexus 5X have only one main speaker which is mostly used for listening songs and enabling loudspeaker during a phone call.

If you feel like the volume is not loud enough or you want to enable surround sound on your Nexus 5X, then you can do so. Member ‘sshafranko’ has developed a mod for the Nexus 5X which enables the surround sound speaker effect. How is this achieved? It is simple. By enabling the main speaker and the smaller speaker at the earpiece, you get a surround soud effect since sound comes out from two audio sources at the same time.

There are two different ways to enable surround sound on your Nexus 5X. The first method requires a custom recovery such as TWRP to flash a custom zip file. The second method requires root access. You need to extract the zip file and move all the files to system/etc and then set the correct permissions to rw-r-r.

However, the easiest way is to flash the mod using a custom recovery. Here’s how to do it.

How to install surround sound mod on Nexus 5X

Step 1. Download the mod which enables surround sound and move it to the internal storage of your phone.

Step 2. Turn the phone off. Press the volume down and power keys at the same time. This will boot your phone into TWRP.

Step 3. Make a Nandroid backup in case something goes wrong.

Step 4. Tap on Install and choose the surround sound mod file. Once selected, swipe to flash the file.

Reboot your phone. Open the music player app on your phone and play a song. You will notice that the sound will come from the main speaker as well as from the earpiece. Enjoy surround sound on your Nexus 5X.

If Your Nexus 5X Screen Has Yellow Hue, Replace It