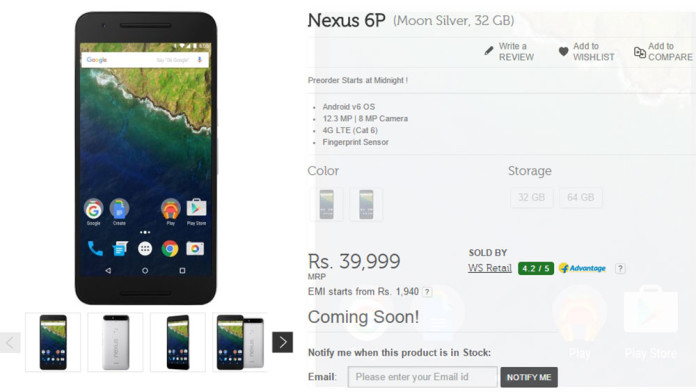 Both the Huawei Nexus 6P and LG Nexus 5X have been listed for pre-order on Flipkart, one of the biggest Indian online retailers and Amazon.in. You can get the Huawei Nexus 6P right now for Rs. 39,999 which translates to $614 and the LG Nexus 5X for Rs. 31,990 which translates to $491. These prices are higher than in the United States but again, the same thing is happening in Europe as well.

To make up for the high price of the gadgets, Google will be giving a few free things including Bluetooth headsets, gift cards, free screen replacements and free Chromecasts. However, this still doesn’t fully make up for the big difference in price.

You can pre-order the Huawei Nexus 6P right now from Flipkart where the 32GB variant is available and the LG Nexus 5X 16GB variant from Amazon.in.

Google is trying to gain a larger Nexus user base with its two latest flagships. The company is trying to reach to all markets with a high-end phone like the Nexus 6P and a cheaper yet powerful Nexus 5X.

Previous articleHaving Problems With Marshmallow WiFi Battery Drain? How To Fix It
Next articleHow To Use File Manager (Explorer) on Android 6.0 Marshmallow