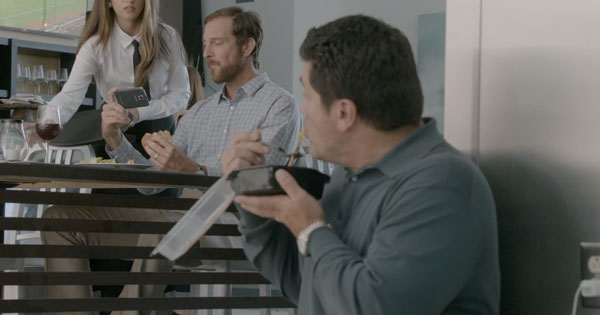 Here is the latest funny Samsung Galaxy S5 AD which bashes all iPhone users for the low battery life their devices have. The Samsung Galaxy S5 has undoubtedly one of the best battery lives for a smartphone. Even though it doesn’t have the biggest battery ever which is 2800 mAh, software features like Ultra Power Saving Mode and the ability to change the batteries make the Galaxy S5 ideal for someone who wants long battery life.

It seems like something has happened and all iPhone users have to go to different public places to charge their iPhones. They sit down on the street waiting for their device to charge. The narrator says that iPhone users can’t enjoy good things in life.

They can’t even stay near people they love because they have to charge their Apple devices. On the other hand, there is a completely story with Samsung Galaxy S5 users. Galaxy S5 users look like they aren’t affected from this at all. They are happy, with their friends watching a video.

Suddenly, a Galaxy S5 device goes down to 10% but the owner isn’t worried at all. She activates Ultra Power Saving Mode and continues doing her job. Meanwhile, another S5 user opens the back cover and changes the batteries. An iPhone user nearby is amazed and wished he could do the same with his iPhone.

This Samsung Galaxy S5 AD is very hilarious and you should watch it too. If you don’t have a Galaxy S5, does the video make you want to buy one?