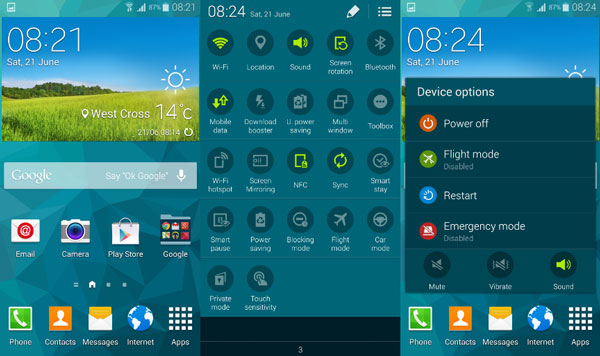 If you don’t like to install or flash custom ROMs but you still want some of the best features that a custom ROM offers then you should install a deodexed and zipaligned Samsung Galaxy S5 firmware. Android devices have the opportunity to install non official firmwares which are called custom ROMs.

If an Android user is not happy with the stock firmware the phone has then he can install a ROM which is a lot better for many reasons. It has root access so you can use all applications which require root and it is deodexed and zipaligned. Deodexed and zipalinged ROMs offer better performance and battery life thanks to the optimizations made to the applications.

But not all want to install a custom ROM on their Samsung Galaxy S5 units because apart from these good features, a ROM can also have different user interface and launcher which many people don’t like. So the best thing to do is to install a firmware which is exactly the same as the stock one when it comes to visuals but it is zipalinged and deodexed.

You can easily do so on your Samsung Galaxy S5. If you have the latest Samsung Galaxy device and don’t want to install a custom ROM but want all its features, you can install the customized stock firmware. The firmware is based on latest Android 4.4.2 version and it is available for both Samsung Galaxy S5 variants, SM-G900F Snapdragon variant and SM-G900H Exynos octa-core variant.

The customized firmware has the following features:

As seen on the list, this firmware is also de-knoxed so Samsung KNOX program has been removed.

2. Copy the downloaded file to your phone memory.

3. Turn your Samsung Galaxy S5 off and boot it into Recovery.

4. Flash the file and then reboot your phone.