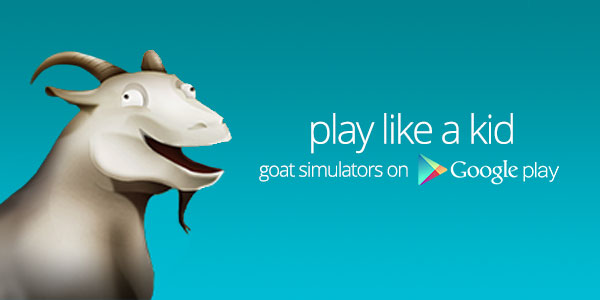 Download and have fun playing Goat Simulator on your Android or iOS device. Goat Simulator is the new weird game that all people are obsessed with. Goat Simulator is a funny game for Windows and it is getting more and more popular every day for two reasons: It is an addicting game that can easily entertain you and the game is played on the most subscribed channel on YouTube, PewDiePie,

PewDiePie is the same channel which made Flappy Bird go viral which got millions of downloads. But why is Goat Simulator so addictive and why millions of people like it? It is simple. You control a goat which is indestructible, has a funny face and can destroy an entire city.

Also Read: How To Benchmark Android Games For The Best Performance

New characters are unlocked throughout the game such as penguins, lamas, giraffes, devil goats and more. Overall it is a fun game which will keep you entertained for hours. Goat Simulator is available only for Windows but there are already clones of the game on Play Store and App Store.

Even though these games are just clones, they are surprisingly quite good and entertaining. Of course, Goat Simulators found on mobile markets aren’t the same as the original version of Goat Simulator. If you simply search Goat Simulator on the Play & App Store you will see hundreds of games.

Goat Simulator clones are so good that even Google promoted it on Twitter. Google has twitted a photo which says: Play like a kid with Goat Simulator. Download Goat Simulator for Android devices here. There are a lot of simulators you can download for iOS devices too.