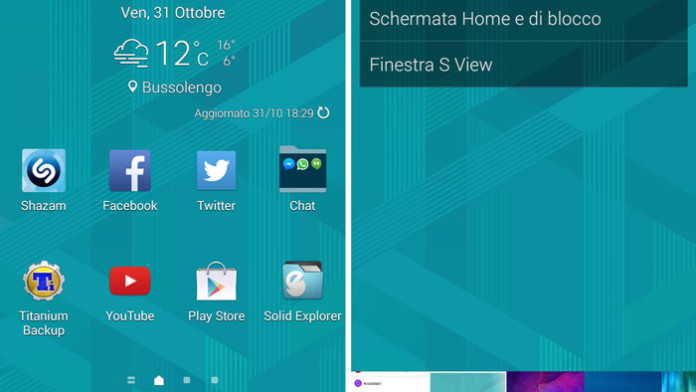 More software goodies are leaking out from the Samsung Galaxy Note 4. Since the official release of the system dump and the Galaxy Note 4 device itself, tons of applications have been ported to other Galaxy phones.

This is the beauty of Android. A newly released smartphone has a lot of options, new applications that older phones do not have. Also, every new generation has redesigned interface for better user experience.

The same thing happens with the Samsung Galaxy Note 4 too. The user interface of the newly released Samsung phablet is a total redesign over the Galaxy Note 3. First of all, the launcher and weather widget are a lot different compared to the Note 3 but similar to the S5. But that is expected because the Note 4 is just a bigger version of the S5.

Thanks to the amazing developers of Android community, the official APK of Samsung Galaxy Note 4 launcher and weather widget has been extracted from the firmware and can actually be installed on other devices.

Well, the APK cannot be installed on all Android devices. There are a few requirements. First of all, you must have a Samsung phone. Next, it must be running on stock Touchwiz and not custom AOSP ROM. Also, the Android version should be 4.4.4 KitKat, otherwise it will not work.

You might need to uninstall your stock Touchwiz launcher before installing the Note 4 one. Before uninstalling it, make sure to back up it in case you need to restore it later.

Previous articleHow To Root Galaxy S3 with Framaroot
Next articleIs Your Samsung Galaxy Note 4 Fake? How To Check