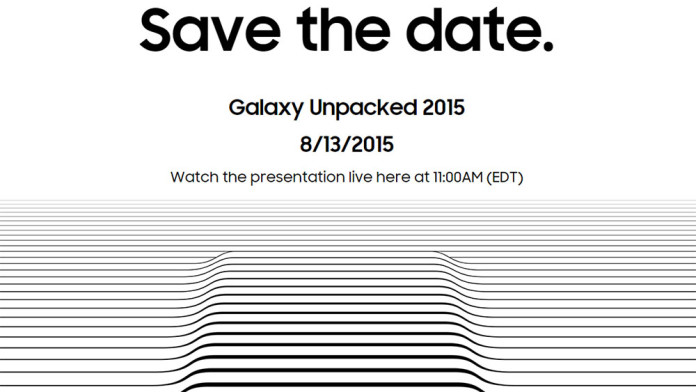 Today is the long-awaited day where Samsung releases the next flagship phablet of the year. The Samsung Galaxy Note 5 will be the next flagship phablet from Samsung, even though it will not be the only smartphone released. Samsung has planned to release a bigger version of the Galaxy S6 edge, called Galaxy S6 edge+, which might be similar to the Galaxy Note 5 but with more defined screen curves.

Unlike Apple which prefers to show the live stream announcement event for Apple and iOS devices only (Mac, iPhone, iPad), Samsung makes the live stream available for all platforms. The Samsung Galaxy Unpacked 205 Live Event can be watched from Windows and Mac OS computers on almost every browser, Android and iOS OS, and more.

Samsung will announce the new Samsung Galaxy Note 5 and Samsung Galaxy S6 edge+ during Galaxy Unpacked 2015 Live Event, alongside other projects and devices. Both phones will come with 3000 mAh batteries. The Galaxy Note 5 will have a 5.7-inch QHD display with resolution of 1,440 x 2,560 pixels, which turns into a 525 ppi screen density, 32 GB or 64 GB storage, 4 GB RAM, 64Bit octa-core Exynos 7422 processor, 16 MP main camera and 5 MP front-facing camera, and Android 5.1.1 Lollipop.

The Galaxy S6 edge+ will have the same display, but it will run on a slightly slower Exynos 7420 chip. Other specs include 4 GB RAM, 16 MP main and 5 MP front camera.