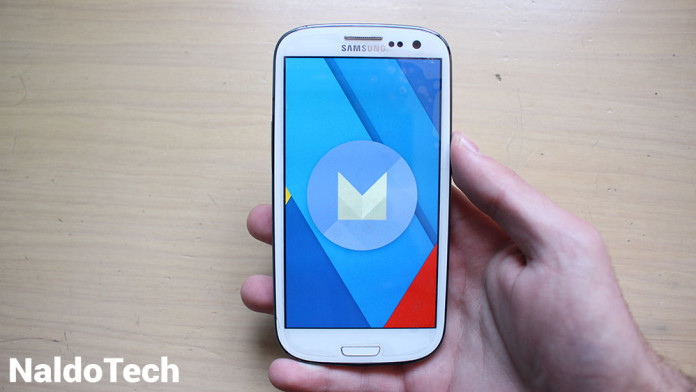 Now, the second ROM is CyanogenMod 13, which has a lot more features and it is more stable. CyanogenMod 13 is based on the latest CM sources and features Android 6.0.1 Marshmallow on board, which is an update over the old Android 6.0 version.

According to ‘forkbomb444’, the developer of the ROM, many things are working. You will be happy to hear that important features and services are already working such as WiFi, Bluetooth, NFC, colors, SD Card, RIL (phone calls, SMS, mobile data), camera, DRM and GPS. Some known issues include non-FAT32 SD cards not working alongside WiFi P2P.

You need to download the ROM file itself (cm-13.0-20151212-UNOFFICIAL-i9300.zip) as well as Google Gapps (Download). To flash these two files, you need a custom recovery such as PhilZ or TWRP (Install).

Step 1. Download both required files, the CyanogenMod 13 Android 6.0.1 Marshmallow ROM and Marshmallow Gapps and move them to the internal storage of your Galaxy S3.

Step 2. Turn your Galaxy S3 off and boot into recovery mode, TWRP or PhilZ. To do so press and hold the volume up, home and power keys at the same time.

Step 3. Once in recovery, make a full Nandroid backup. The ROM is not stable and you will want to go back to your previous ROM.

Reboot you phone and get ready to enjoy Android 6.0.1 on your Samsung Galaxy S3.