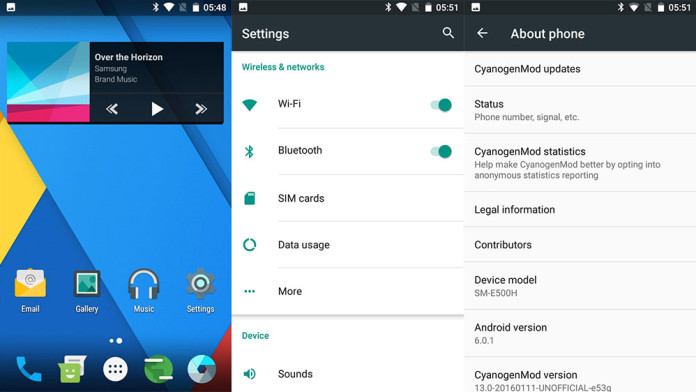 Samsung releases a plethora of devices each year. You have the main Galaxy S flagship line, the Note series, E, J, A series and much more. While Samsung releases new devices designed for users who don’t want the flagship phone, the company fails to update them and provide frequent software updates.

Most of the phones never receive any software updates and this is something that Samsung has been criticized for. One example is the Samsung Galaxy E5. Released in February 2015, the phone never made it past Android 4.4.4 KitKat, the only Android version that the Galaxy E5 ever had.

Even though the Galaxy E5 has a capable hardware to support Android 5.0 Lollipop and even 6.0 Marshmallow, Samsung hasn’t made any plans to release any software updates. And this is the part where individual enthusiast developers come to help.

A recognized developer which is often known as jackeagle has published the first CyanogenMod 13 build for the Samsung Galaxy E5. This is an unofficial build and by no means stable. The ROM is based on CyanogenMod’s Android 6.0.1 Marshmallow source code so it provides the latest Android experience.

How to install CyanogenMod 13 Marshmallow ROM on Galaxy E5 E500H

Even though the Galaxy E5 is not a very popular device and there aren’t many developers working on the phone, the developer has managed to create a relatively stable ROM. The only two bugs that haven’t been fixed yet are Radio FM and audio from the main speaker. All other bugs have been fixed since the developer releases updated builds.

Download the ROM and Gapps on your computer, then connect your phone to your PC and transfer both files to your phone. Now you need to turn the phone off, go into recovery mode, perform a Nandroid backup and wipe data and cache. Then you need to install the ROM and then Gapps.

Now you need to restart your phone. When the phone boots up, you need to setup the new Android version and you are good to go.