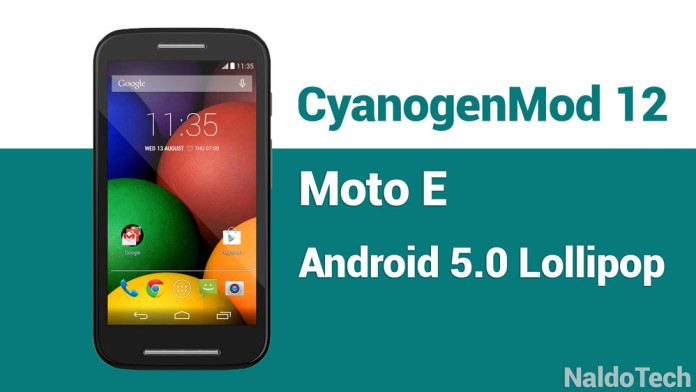 The Moto E is feeling a little lonely seeing all its bigger brothers getting a bite of Lollipop, often considered as the biggest and most important Android update Google has ever issued. Many of you will agree with this fact. It is a complete redesign since Android 4.0 ICS. The best thing is that it is the fastest growing version ever.

When it comes to Motorola, users are relatively happy. The company has issued the Android 5.0 Lollipop to 2013 and 2014 variants of the Moto X and Moto G. If you go to the official site, you will see that they are upgradeable to Lollipop. But if you look at the Moto E, it says that the upgrade has been planned.

So Motorola will update the Moto E to Lollipop as well, but the official date is unknown. Users have been patiently waiting for the update for a couple of months and many were left disappointed when other Moto devices received it and the Moto E didn’t.

Fortunately, the amazing developers took care of this problem while Motorola is working for a stable and official Lollipop release. CyanogenMod 12 ROM has become the only and best way for a device to enjoy Lollipop. There are a myriad of great devices that haven’t had the chance to get a taste of official Android 5.0. The only solution is CyanogenMod 12. CM12 has proved itself to be the best ROM based on Lollipop. It it the fastest among all other ROMs.

Motorola E users will be happy to hear that a CM12 build has reached to this device. And the best part has yet to come. It is not a buggy port where most of things do not work. Based on early adopters, the ROM appears to work very well. All major features are intact including SD Card, camera, WiFi, internet connection and Bluetooth. Performance is great and RAM consumption is normal.

The installation process is very simple as you could expect from every other ROM. You need to download the zip file on your phone, boot into recovery, wipe data and cache, flash the ROM, gapps and reboot your phone.