After 4.4.4, Google stopped developing KitKat and announced the new version called Android L. Android L is a totally new operating system when it comes to the interface and user experience. Everything is totally changed and everybody is liking it.

But once the new version of Android gets released, we need to focus on devices that have yet to receive Android 4.4.4 KitKat. One of these devices is the Samsung Galaxy S5 and there is a very good news for all Verizon users. The carrier has rolled out the new 4.4.4 update. 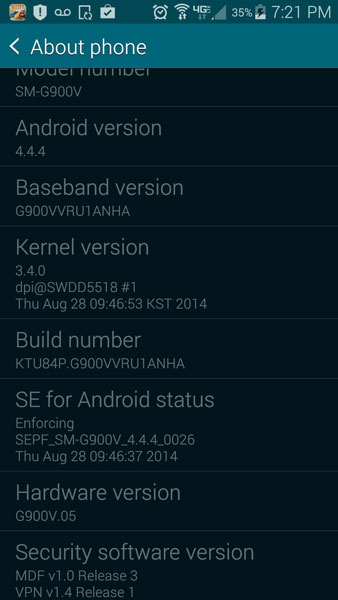 Yes, weirdly enough, Samsung has updated Verizon Galaxy S5 to 4.4.4 while the original Galaxy S5 is stuck at 4.4.2. The update comes through OTA and it is 346 MB big, which is quite big for on OTA update. The new version is faster, improves user experience and fixes a lot of security bugs.

How to download and install Android 4.4.4 KitKat update on Verizon Samsung Galaxy S5

1. Unlock your phone and go to Settings.

2. Scroll down to About Device and tap on Software update.

3. Tap on Update now. The phone will search for the update.

If you haven’t received the update just yet, you can download the zip file ROM. The firmware has already been rooted and the tutorial on how to root 4.4.4 KitKat on Verizon Galaxy S5 will be out soon.