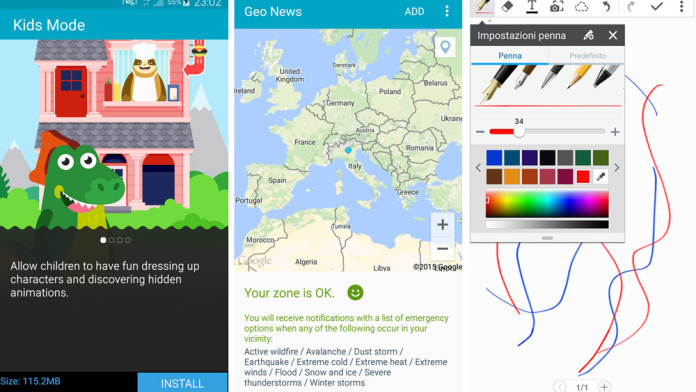 The Samsung Galaxy S6 has taken the spotlight in the Android scene, leaving behind other flagship devices like the HTC One M9. The reason why the Galaxy S6 is so popular is because of the brand new design with premium materials (aluminum and glass), Android 5.0 Lollipop, improved camera, faster processor and new Touchwiz features.

Thanks to the magical powers of Android developers, official apps of the Samsung Galaxy S6 have been published online and you can install them right now. The Galaxy S6  comes with a revamped version of Touchwiz, introducing a new launcher, weather widget and slimmed down system applications. This reduces RAM usage and improves performance.

The Samsung Galaxy S6 is not out yet for users to buy it and developers have already managed to release the APK files of some of the most important apps. Here is a list of all apps that can be downloaded right now:

As you can see, the list is quite long and you will have a fun time testing them out. With S Note you can take notes, GeoNews provides geo-targeted news, Smart Remote uses the IR blaster of your phone to control the TV and Kids Mode blocks important apps and leaves games only.

The Samsung Galaxy S6 Touchwiz launcher APK file has yet to be obtained but at this rate, all apps will be accessible in the following days. All developers need is a system dump of the Galaxy S6 Lollipop firmware.

You can download all Galaxy S6 APK files here. These apps are optimized for the Galaxy S4 but they should work for other Galaxy devices like the Galaxy S5, Note 4, Note 3, for as long as they are running on Touchwiz firmware. If they do not work, contact the developer for your phone to get a proper ported app.

Previous articleHow To Fix “Your device has been modified. Software updates are not available” Error on Android
Next articleInstall N900XXUEBOB2 Lollipop Firmware on Galaxy Note 3 (India)