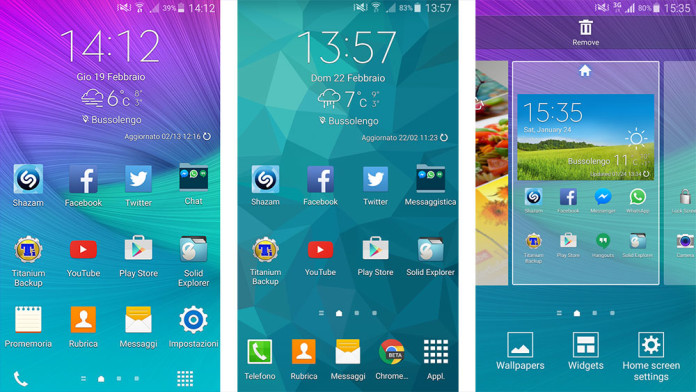 The Samsung Galaxy S4 is getting a lot of software presents lately. The Galaxy S4 is two years old now and Samsung will eventually drop support for it. The tech giant updated the phone to Lollipop but it looks like this will be its last Android software update.

Users have complained a lot regarding the Lollipop update. Even though it brings better performance and enhanced functionality, the firmware update wasn’t complete with many things missing, one of them being the new Galaxy Note 4 launcher.

Samsung has a habit of not including the latest launcher on software updates. So even though the Galaxy S4 is enjoying official Lollipop update, it is stuck on its old launcher and weather widget. It is not bad by any  means, but the new one on the Note 4 and Galaxy S5 looks better.

In this article we are going to talk about how to download and install the Galaxy Note 4 and Galaxy Note Edge launcher and weather widget on the Galaxy S4. If you are interested in the Galaxy S5 launcher, check the article below.

Please do not mistake the Galaxy Note Edge for the Galaxy S6 Edge. The Note Edge was released alongside the Galaxy Note 4 a few months ago while the S6 Edge has just been released. But seeing how active developers are, we will see a ported version of that launcher too.

There are three ported apps that you can install, the Galaxy Note 4 launcher and weather widget, and Galaxy Note Edge launcher.