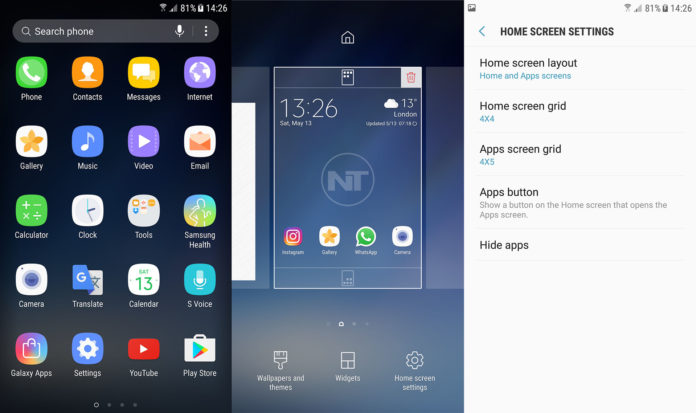 The Samsung Galaxy S8 and S8 Plus launcher has been one of the most requested applications and programs in the Android world. Ever since the device got released a month ago, Android fans and especially Samsung users have done nothing but search for ways to install the launcher on their devices.

Developers rushed in to port the launcher to older Samsung phones, having a huge success with Galaxy devices running Android 7.0 Marshmallow with GraceUX (TouchWiz). The problem is that the launcher port that developers released online wasn’t compatible with older phones running on Marshmallow and the old, non-GraxeUX firmware.

Users who would try and install it on devices with Marshmallow firmware would receive errors such as “Unable to install package”, “Unable to parse package”, “Installation aborted” and similar warning messages. These are common errors when users try to install an app which isn’t compatible with their OS version.

Luckily, Samsung has finally released the official Samsung Galaxy S8 launcher for all Samsung phones running Marshmallow and Nougat. It is officially supported by Samsung and it is available on the Play Store.

Now that Samsung has officially released the S8 launcher, you can go ahead and download it from the Play Store. One thing to note is that the app is not available on all markets just yet, so your country might not be supported. In this case, we also have the official APK file for your convince.

Now your Nougat or Marshmallow Galaxy device will have the latest GraxeUX Samsung Experience. If you are experiencing any issues or crashes with the new launcher, go to Settings > Apps, select TouchWiz Launcher and wipe data and cache.