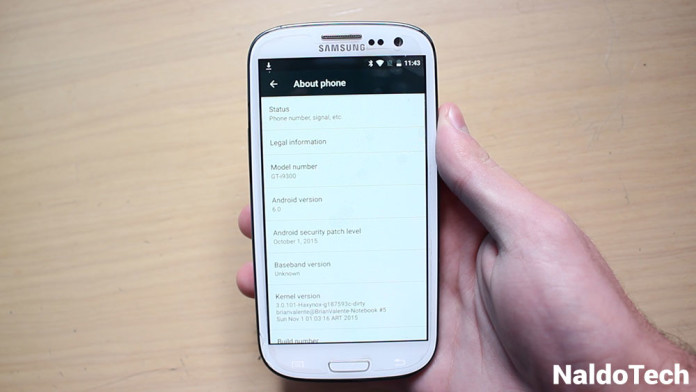 Once again, the international variant of the Samsung Galaxy S3 GT-I9300 with Exynos chipset is enjoying the latest version of Android, this time Marshmallow thanks to CM13 custom ROM. The last official update that the Samsung Galaxy S3 received was Android 4.3 Jelly Bean. But ever since, the phone has been enjoying frequent software updates and THE latest versions of Android thanks to custom AOSP ROMs.

CyanogenMod 13 is the latest ROM which brings Android 6.0 Marshmallow experience to the table. While there are no official CyanogenMod 13 builds by the Cyanogen team, the CM13 source code is already available so developers can take the code and build functional Marshmallow ROMs for their devices.

One of the members, brianlev, is the first developer to release CyanogenMod 13 ROM for  the incredibly popular Samsung Galaxy S3, which even though it is more than 3 years old, it is used by thousands of people today.

The ROM is in alpha stage, so it is not designed to be used as a daily driver. However, considering that this is the first build, the Haxynox CM13 ROM for the S3 is considered quite stable. Touchscreen, WiFi, USB OTG, camera, sound, screenshots and Bluetooth are working, while RIL (calls, SMS, mobile data) and SD card have yet to become functional.

Move the CM13 ROM zip file to the internal storage of your phone. Turn the phone off and boot into recovery mode (home + power + volume up keys). In recovery, make a full system Nandroid backup. Then wipe data and perform a factory reset. Then go to ‘Install’ or ‘Install zip from SD Card’ and choose the CyanogenMod 13 ROM.

Once the ROM is installed, reboot your phone. You will be greeted with the stock Android 6.0 Marshmallow home screen.