Here are 5 bad things about the new LG G3. The G3 is the first device to have a QHD LCD IPS display on a smartphone. It is the highest resolution screen on the market right now and it makes everything sharp and very detailed.

The LG G3 has a lot of good things which make it worth to be bought. However, no smartphone is perfect. Every device has its own problems and the LG G3 is not an exception.

Also Read: The LG G3 Has The Best Battery Life Ever, Even Better Than The Galaxy S5

Here are 5 bad (negative) things about the LG G3 which might be deal breakers for many people.

Even though the QHD display of the LG G3 is the biggest selling point of the phone, it is also one of the weakest points at the same time. Most of the reasons which will be mentioned below will be related to the screen. The good thing about LG G3’s display is that it is QHD.

It has a resolution of of 2560 x 1440 pixels and all these pixels are put inside a small 5.5″ screen. However, the QHD resolution seems to be the only good thing about the display. As for the negative sides, the display is very dim on bright places.

The maximum brightness the screen has is noticeably lower than the displays of the Galaxy S5, Sony Xperia Z2 and even iPhone 5S. This makes it almost impossible to see the screen in direct sunlight while you can easily do so with the S5 and Z2.

The display not only is very dim in bright places, but it is also very bright on dark places. Yes, LG G3’s display minimum brightness is 9 nits which is a lot brighter than other smartphones like the Galaxy S5 which can go as dim as 2 nits. This makes it bad for your eyes if you use the phone a lot at night when all the lights are turned off because the light coming from the screen is too bright.

To get such a high resolution in such a small display, LG had to compensate it with washed out colors and bad viewing angles. The colors are nowhere as vibrant as colors on other LCD IPS displays and can’t even be compared with the vibrant colors of Super AMOLED displays. Also, viewing angles are not the best. Colors look washed out if you tilt the phone even just a little bit.

Even though the LG G3 has the best display on the market, it doesn’t have the fastest and most powerful chipset. It has the Snapdragon 801 chipset and Adreno 330 GPU.

The Snapdragon 801 chipset is very fast but it isn’t fast enough for that high resolution display. The processor has to work a lot more to power the QHD screen. This leads to worse performance compared to its 801 rivals which have a Full HD screen instead of a QHD one. 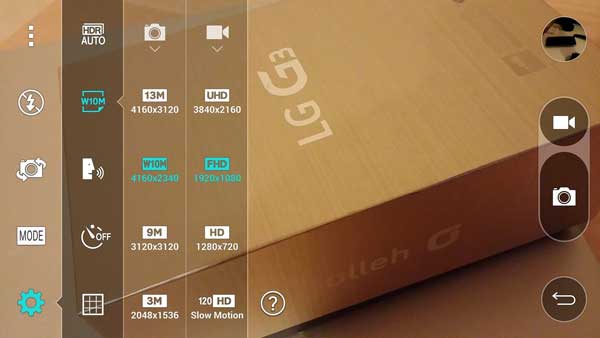 Nowadays, smartphones are getting better and better camera sensors everyday. The photo quality is improving so much that they are achieving better results than dedicated cameras and DSLRs. Obviously, a normal smartphone user would use the camera app on auto mode.

Also Read: Here Are The Best Features Of The New LG G3

However, the Auto Mode never captures the best photos. In order to produce a good quality picture you have to tweak the camera app.

The problem is that LG G3’s camera app is very limited and there are many things missing like manual ISO, White-Balance and more which are a must in order to take a perfect picture.