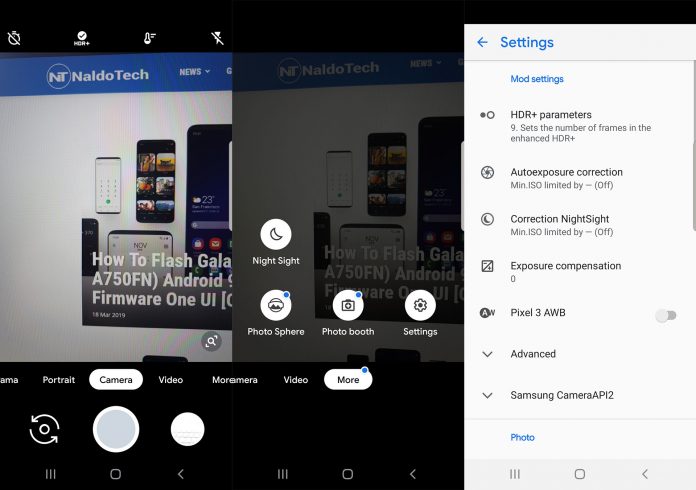 You can now install Google Camera on the Samsung Galaxy S10e, Galaxy S10, and Galaxy S10 Plus. The Pixel 3 is considered as the smartphone with the best camera ever, and that is particularly thanks to the camera app the phone has. Google has put all its knowledge and resources into the camera software and has created one of the best camera apps in the world. The Pixel 3 can take some of the best pictures in low-light and portrait modes.

With the release of the flagship trio by Samsung, users have been looking for ways to install the Google Camera (GCam) on their phones. The Google Camera provides better pictures in most cases. Photos are not as overexposed as with stock Samsung camera app, low-light photos are much brighter and the photos overall are sharper with more detail in them.

Developer cstark27 has published the proper Google Camera 6.1 APK file which works with the Galaxy S10e, S10 and s10 Plus. The app works well only on the Snapdragon variant. You can install it on the Exynos variant but photos taken on phones with this chipset are overexposed. Furthermore, modes like Portrait and Night Sight will not work on Exynos phones.

Note: In order for the camera app to work, you should install the day one update from Samsung. The company rolled out a software update on the release day of the phones. If you haven’t installed that update yet, we suggest you to do so.

The Google Camera for the Galaxy S10 has all the features that you might want, including Portrait Mode, Night-Sight, HDR+ and the use of the wide-angle camera.

Close and open the Google Camera and start using it on your Samsung Galaxy S10e, S10 or S10 Plus.

If you have already installed the camera app, share some of the pictures that you have taken. Have you noticed any difference between the stock Samsung camera app and the ported Google camera app?

Previous article
How To Flash Galaxy A7 (SM-A750FN) Android 9.0 Pie Firmware One UI [ODIN]
Next article
How To Install Galaxy S10 One UI Icon Pack on Samsung Phones