How To Fix Loss Of Signal Problem On Moto G 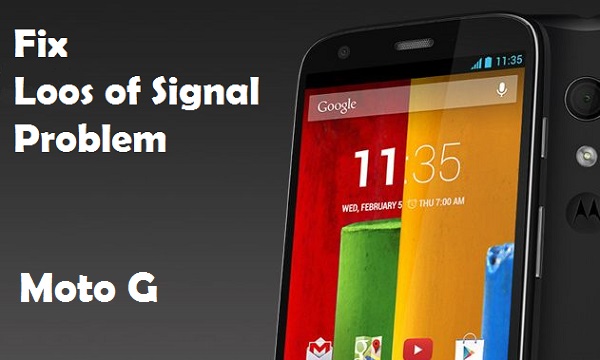 Motorola G or simply Moto G is a well known smartphone for its low price. With a quad-core processor and a HD screen the Moto G is definitely the best choice for your budget. Moto G users in general have good opinions about the phone and its performance but as every smartphone it has its own problems.

It doesn’t have a perfect design like other smartphones but it’s not bad either. Powered by Android Moto G is a good phone for those who don’t like to spend too much money on smartphones. With dual sim support it makes the calling experience simple so you don’t have to take two phones in order to use two numbers.

Also read : How To Fix Not Hearing Sound During Call Problem On Moto G

This is probably the best thing of the phone along the price. You can use a SIM card for calling and another one for browsing the internet. After updating to 4.4.2 a lot of people have reported some issues with the phone where the most irritating problem is loss of signal.

The problem is reported  in many countries by many users. The phone signal drops automatically and you can’t make a call or navigate on the internet. Sometimes the phone also loses connection with the SIM card. Before updating to android 4.4.2 no one has reported a similar issue. In many cases when you try to make a call you receive an error that tells you to turn off the airplane mode even you haven’t turned in on.

A simple solution to fix the signal issue is to restart the phone. This is not a permanent solution but it can help you. Sometimes the signal suddenly gets fixed and you don’t have to restart your phone.

Also you can try to turn airplane mode on and then turn it off again. Sometimes it works and this is a fastest way to restore your phone signal. The issue was reported to Motorola engineers and they are are working to release a new update to fix this issue. They have already released an update but it doesn’t fix all the problems.

Also read : How To Update Moto X and Moto G to Android 4.4.3 KitKat

So you only have to wait for the next update to fix the problem. To check for updates go to Check your phone to Settings > About Phone > System Updates. But for now try those simple solutions that fix the problem temporarily.