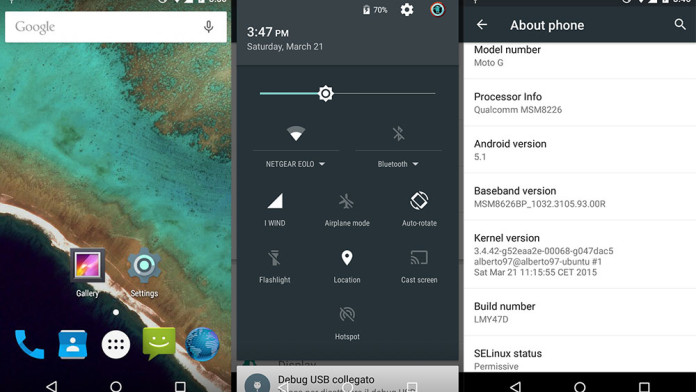 The Motorola Moto G released in 2013, often referred as the 1st Gen of this device, has received stable and fully working Android 5.1 Lollipop custom ROM. The ROM is AOSP-based so it has only the most basic functions and no extra added features like you would find on other custom ROMs like CyanogenMod 12 or Paranoid ROM.

The Moto G (2013 variant) is often considered as the best smartphone for the price. It packs a lot for a very low price. For just $100, you get a smartphone with an HD display, quad-core processor, 5 MP camera and excellent build quality. On top of that, it receives frequent software updates directly from Motorola.

Now, Google has announced another version, Android 5.1 and Motorola has yet to seed an update for the Moto G 1st Gen. The update will come in the following days or weeks. If you are too impatient, you can get a glimpse of Android 5.1 Lollipop on your Moto G (2013) by installing an AOSP ROM, created and developed by Alberto97.

The ROM is mostly stable, with most of the things working. However, there are a few bugs.

First of all, make sure that the bootloader is unlocked and you are running on a custom recovery.

As stated above, the ROM is not fully stable. If you have installed it, share your experience with us.