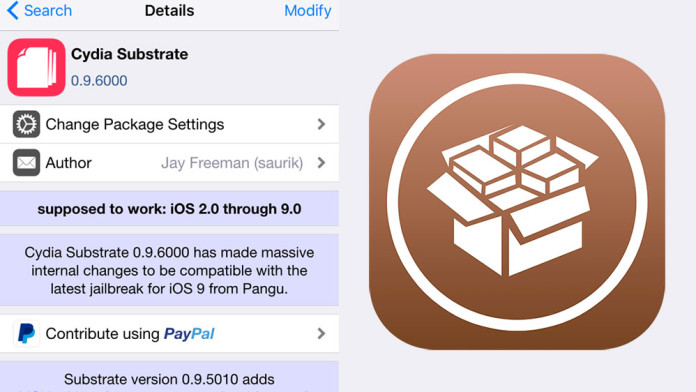 This has to be the fastest jailbreak release tool ever. In just a couple of weeks, iOS 9 phones can enjoy untethered jailbreak thanks to Pangu jailbreak tool. Pangu supports all phones running on iOS 9, 9.0.1 and 9.0.2, starting from the old iPhone 4s to the newest iPhone 6s.

However, such a sudden release of iOS 9 jailbreak has caught Cydia developers off guard because most of Cydia tweaks have yet to be updated to support iOS 9. One of the first developers to add support for iOS 9 jailbreak is Saurik, which has updated Cydia Substrate to version to 0.9.6000.

You can now download and install your favorite Cydia tweaks on iOS 9. As per usual, do not forget Winterboard if you are into customizing the look of your phone. With Winterboard you can change app icons and UI elements.

If you haven’t jailbroken your phone with Pangu yet, follow this tutorial:

Guide: How To Jailbreak iOS 9 Devices With Pangu on Windows

Now that your phone is jailbroken, you need to update Cydia Substrate to the latest version.

With that being said, the developer himself recommends all users to hold off for a couple of days until Cydia tweaks are fully updated with the required bug fixes.