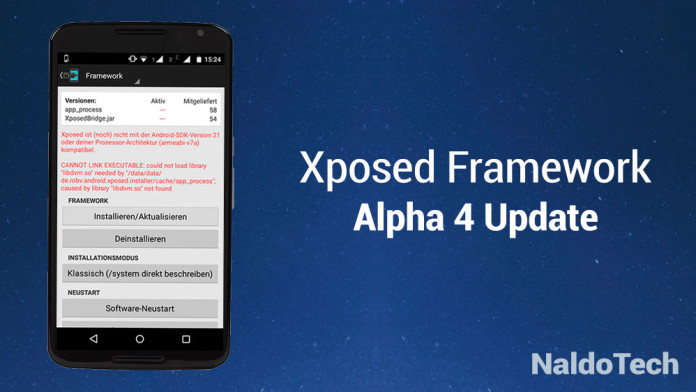 Xposed founder and developer “rovo89′ has announced Alpha 4 version of the popular framework for Android devices. Android 5.0 Lollipop has put the Xposed community to work to make the entire framework and all modules work on the latest version of Android.

Xposed is a popular framework for a long list of Android devices which is based on modules. Once the main Xposed framework is installed, users can download and install modules which can customize different parts of the operating system.. Some modules do nothing more than changing the user interface while other, more advanced modules can increase performance and battery life and even improve security.

Android Lollipop brought a lot of new changes, one of the most important one being the replacement of Dalvik with ART as the runtime system. This broke the entire Xposed framework as well as modules. Half a year after the release of Lollipop, rovo89, the creator of Xposed framework released the first Alpha version which made the framework work on Android 5.0 Lollipop devices.

Throughout the weeks, the developer has been constantly active, updating the framework multiple times, fixing bugs and adding more devices. The latest release is Xposed Alpha 4, which among many issues, fixes the bootloop bug.

The bug has to do with Sony Xperia devices which do not go past the boot animation screen after flashing the framework. This has been fixed on Alpha 4 and you can go ahead and flash the framework if you are a Sony Xperia user.

Unfortunately, this doesn’t fix the bootloop problem with Samsung Galaxy devices that have TouchWiz firmwares. Samsung has changed the way TouchWiz works on Android 5.0 Lollipop, breaking Xposed. Also, there is no news when Xposed will become available for Android 5.1 Lollipop.