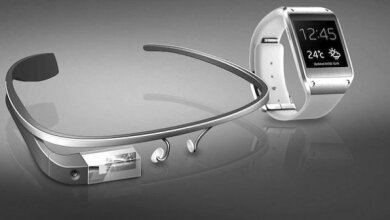 Google Glass and Galaxy Gear are two devices which are really building up the concept of wearables. Even though they’re both wearables, they change a lot, from they design to their functions.

First of all and the biggest difference is the design. Google Glass is designed to be put on your head like normal glasses whereas the Galaxy Gear is a smart watch, and like one it is designed to go around your wrist.

They differ from their functions and how they work too. The Galaxy Gear is created to be a shortcut of your smartphone. That means you can do basic stuff directly from your watch without pulling out your phone.

Strangely enough, you can take a picture with it. It would be very awkward though to point out your hand at the direction you want to record something. Also, web browsing is not available on this smartwatch. Plus, who would want to browse the web on that 1.6″ Super AMOLED display anyway?

Google Glass is a bit more advanced. It has a small prism projector with a resolution of 640×360 pixels. However, the fact that Glass is near your eye makes the display look like a 25″ screen. Navigating the web is easier on Google Glass because the screen is “bigger”. You can control it very easily through voice commands and gestures.

When you compare specs of these two devices, Google Glass is a faster device overall with a dual core Omap SoC, 1GB of RAM and 16 of internal memory . The Galaxy Gear has lower specs. 800MHz single core CPU, 512MB of RAM and only 4GB of internal storage. You can see that Google Glass easily wins the specs battle.

Don’t forget the camera. Glass has a 5MP camera and Gear has a 1.9MP camera. Not only video quality is better on Glass but recording a video is easier too.

Gear is supported only for 3-4 devices such as the Galaxy Note 3 and Galaxy S4 whereas Glass has a much wider support.

Overall Glass is a better device. Still, there are some things you should note. Google Glass is not for everyone. It can be quite annoying having it on your head all the time and having a smart watch might be a better idea. You should consider the price too. Google Glass is by no any means cheap. It costs as much as 2 high end smartphones.

In conclusion, if you don’t mind the price and want a fast performance go with Google Glass. If you want a cheaper device but more compact, go with the Galaxy Gear.

Previous articleWearables: Explained! Are They The Next Big Thing?
Next articleSamsung Galaxy S5 coming with Ultra HD 4K Display