Wake Up All Android Phones With Double Tap And Gestures 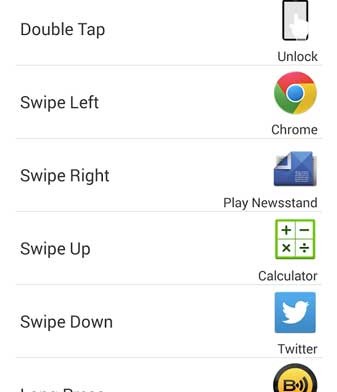 Double tap on the screen and launch various applications on all Android smartphones that have OLED displays. New high-end smartphones like the LG G2, Oppo Find 7a and HTC One M8 have this cool feature that makes it possible to wake them by simply pressing on the screen quickly two times.

Not only you can wake up the phone but by also by making different gestures on the screen you can launch different applications which you have selected. Unfortunately, this feature is available only for a few devices like the ones which were mentioned above.

However, there is good news for everyone who has a smart phone with a OLED display. An app called Knockr has been created and its purpose is to imitate the double taping feature. With this app, you can double tap on the screen to wake it up, launch camera app by pressing the power button while the phone is in landscape mode and swipe up, down, left and right to launch pre configured apps.

This app works only with devices which have OLED displays for one reason. This app doesn’t turn off the screen of the device. The phone is turned on but the screen is black.

That’s how the app recognizes the tap on the screen. Don’t worry about battery life. OLED displays are known to not waste battery life when black backgrounds are being displayed.