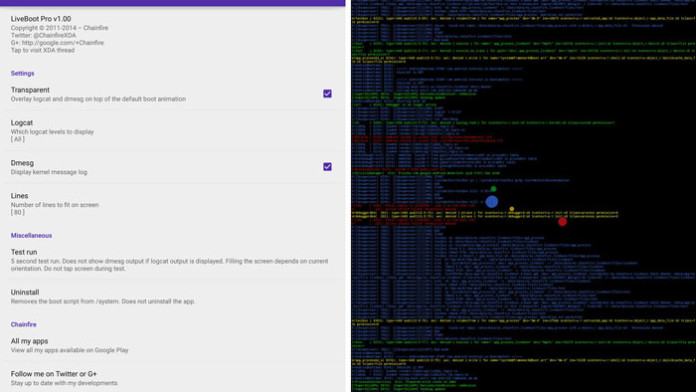 Using Chainfire’s new tool, you can turn the boot animation of your Android device into a logging center. One of the best things about Android is that it can be customized, endlessly.

There is no limit when it comes to customizing your Android phone. You can change the ROM, kernel and even install a completely different operating system. Unlike other operating systems like iOS, Android has many different boot animations.

Each device has a unique boot animation when it turns on and off. If the user doesn’t like that particular animation which comes with the phone out the box, he can easily change it. Flashing different boot animations has become a piece of cake. 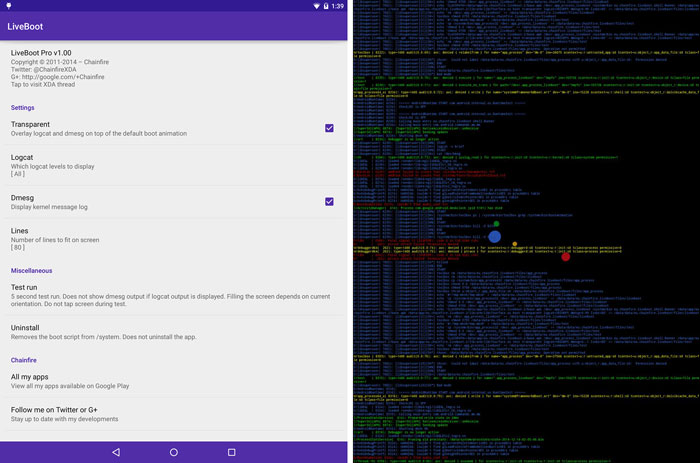 But at the end, the boot animation is nothing more than a bunch of fancy animations which make the waiting time less boring.

If you don’t care about the animation when your phone turns on, then you can turn it into a logging center. Chainfire, the person who is often considered as the father of root has released an app which does exactly that.

Chainfire has been able  to root almost every Samsung Galaxy device using its famous CF-Auto-Root file. CF-Auto-Root is the best option if you want to root your phone without following complicated steps.

Now, the developer has created another application called LiveBoot. This application turns the boot animation of every Android phone into a logging center.

When the phone is turning on, it shows logcat and dmesg outputs on-screen as they happen. This is a great way to test the system configuration without having to turn the phone on.

You can see which scripts are being activated and what not. This is a great wat to troubleshoot any possible issues that might happen with your phone.

The app works on all phones with Android 4.3+ but it works best on 5.0 Lollipop.