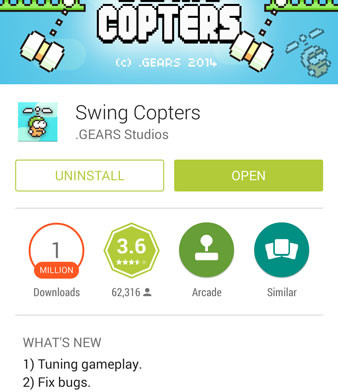 The new update of Swing Copters has made the game a lot easier. Not a bit easier, a lot more easier. Previously, it was almost impossible to even get a score of 1, let alone 5 or 10 like you could get on Flappy Bird. Swing Copters took the place as the king of the most difficult game for mobile devices.

But looks like the new update has changed everything and the game is easier. But what changes does the new update bring which has made many users calmer and has prevented a lot of phones from being broken? If you go to the Play or App Store and search for What is new, the developer has simply said Gameplay Tuning and Bug Fixes.

In fact, Swing Copters had a few bugs like it would crash all the time when it opened for the first time. But the most important change is Gameplay Tuning. This change is the one that has made the game easier. When you open the game, you will notice that the distance between obstacles is bigger. 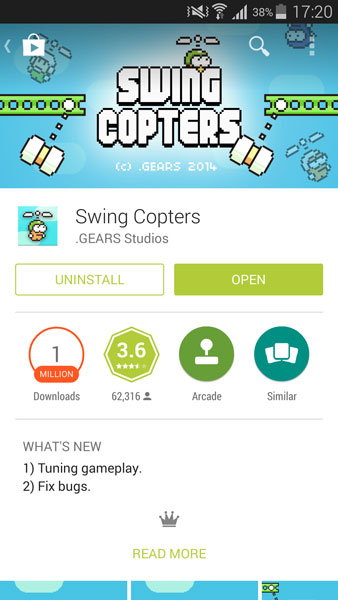 Also, the character doesn’t go left and right like crazy. It moves slower and doesn’t go as fast from left to right. The hammers are smaller and the gap between them is bigger. These are the biggest changes which have made Swing Copters easier.

You can play the game without the fear that you will get mad and break your phone. Now, the game is as difficult as Flappy Bird. If before you were able to get only a score of 1 point, now you can easily get 20 and 30 points.