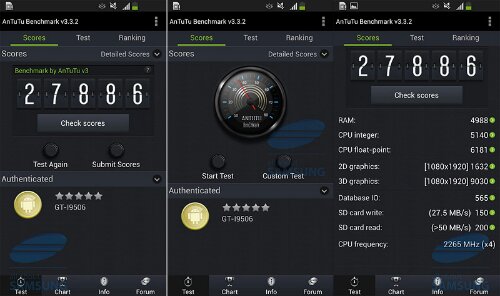 The difference between Snapdragon 600 and 800 is that the Snapdragon 800 uses the latest Adreno 330 GPU whereas the former uses the older Adreno 320 GPU. But does a better GPU will increase the score in Antutu? Let’s find it out.

From the latest Antutu benchmark leak, the Korean version of Galaxy S4 scores 27,886 points which is more than what GT-I9500 and GT-I9505 habe scored.

In the GPU part, the Adreno 330 GPU scored almost 9000 points, again more that the GPUs found on Exynos and Snapdragon chipsets scored.

What do you think guys? If you live in Korea will you buy this device?