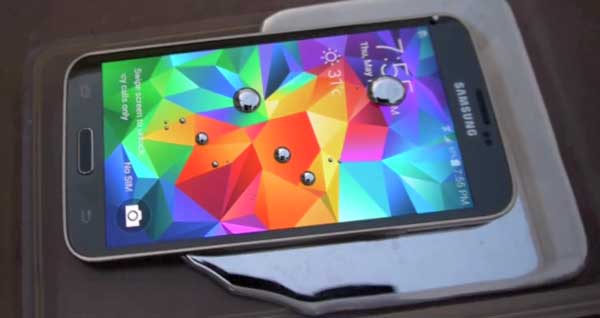 We all know the Samsung Galaxy S5 is water-resistant, but can it melted metals like liquid mercury. The well-known YouTuber for doing crazy stuff with smartphones, TechRax, put the Galaxy S5 inside a square bowl and then poured about 3 pounds of liquid mercury which were inside three tiny bottles.

Once the S5 was inside the bowl with the liquid metal, a cool effect started to take place. Even though the phone was submerged, it wasn’t wet at all like it would normally be if instead of mercury would be water. However, that is to be expected because the metal has a very high density structure.

After playing with the phone submerged in liquid mercury for a few minutes nothing happened really. The youtuber sad that it was a good feeling touching the metal with hands (of course with gloves on). After letting the device rest for a full night, TechRax noticed small mercury circles inside the back cover.

TechRax has also made other funny interesting videos like the one where he smashed a Galaxy S5 with a hammer and the battery exploded which you can see it here.