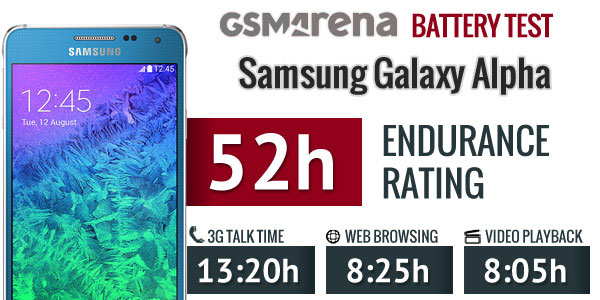 The Galaxy Alpha has all the specifications to be a direct competitor to the iPhone 6. It has good screen, high quality body materials and fast processor. The only thing which is worrying  a lot of users is the battery life. The Alpha only has a 1860 mAh battery which by today’s standards is very small.

Other Android flagships have batteries over 3000 mAh. Even though the Galaxy Alpha has a small 1860 mAh battery, it has an advantage that no other phone has. The octa-core variant of the Galaxy Alpha has the  Exynos 5430 20 nm chipset. It is 8 nm smaller than other chipsets and this should give better battery life even with a small battery.

Overall, the Galaxy Alpha received a decent score on the battery life test. The small battery is one of the weakest points of the phone and the 20 nm chipset doesn’t really help a lot.