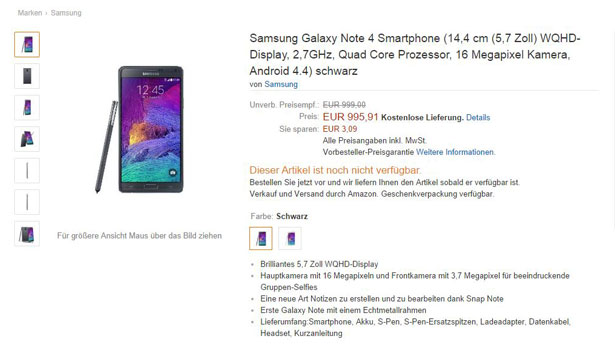 Many German sites have listed the new Samsung phablet for pre-order including Amazon.de, Notebooksbilliger and MediaMarkt. If you want to get one unit early, you should buy it using these online sites. But now here it comes the bad part of the news.

Also Read: Most Expensive and Luxurious Case For Galaxy Note 4

It is not going to be cheap by any means. If you go to Amazon.de, the price is €995 or $1,300 which is just way too expensive for a smartphone. No matter good it is, a price tag of $1,300 is too high for a normal person to spend on a smartphone.

Weirdly enough, Amazon claims they have priced it over €3 lower than the retail price. According to this, the official Samsung Galaxy Note 4 price is going to be over €999 which is not true because even Samsung hasn’t announced a price yet.

If you don’t want to spend that kind of money, than you can check two other sites: MediaMarkt and Redcoon which are selling the phone for a much more lower price of €699. That is still expensive because the Note 3 costed around €600 so there is no reason for the new version to be more expensive.

But maybe this is expected since you have the privilege to be among the first people to get a Galaxy Note 4. Pre-order yours now on Amazon and MediaMarkt.