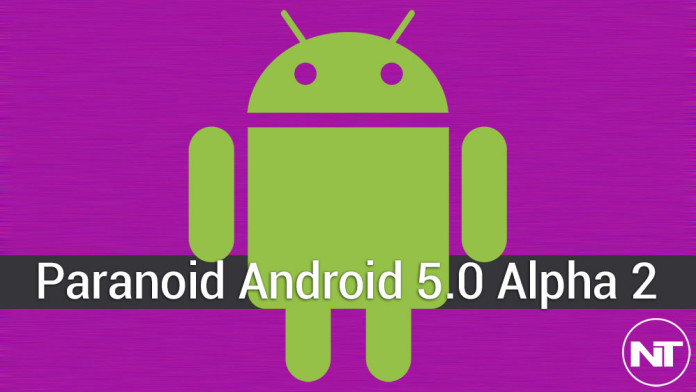 One of the most popular ROMs for Android devices has received another update. Paranoid Alpha is one of the best ROMs that many users choose to enjoy the stock Android experience on their devices. It features stock Android, the exact same firmware that comes on Nexus and Moto devices.

There is no bloatware. The performance is blazing fast and lag is non-existent. Alongside excellent performance, the ROM has some unique features and tools that no other ROM has. The developers that work tirelessly behind this ROM aim to bring the best experience to our devices. And so far, they have successfully managed to do so.

It is one of the few ROMs that can compete with CyanogenMod. Today, developers announced on their blog that the ROM has received an update, going from Alpha 1 to Alpha 2. Paranoid 5.0 Alpha 2, even though the name says 5.0, it is based on Android 5.0.2, which is the latest version. The people behind Paranoid have said that they do not want to clutter the name with more numbers.

Even though the update changes the name from Alpha 1 to Alpha 2, there are a lot of improvements. One major change is the theme engine, where most of the changes and optimizations have occurred. On Paranoid 5.0 Alpha 2 now there is an option called App Ops. This is a neat feature that lets you disable and enable what permissions and information a certain app can get from your phone. This was introduced on 4.3 Jelly Bean, got removed on 4.4 KitKat and it is finally back on Paranoid Lollipop. You can also reorder the tiles on Quick Settings menu.

Paranoid Android 5.0 Alpha 2 ROM, based on Android 5.0.2 Lollipop is available for all officially supported devices from the Paranoid team, including Nexus 6 (shamu), Nexus 5 (hammerhead), Nexus 4 (mako), Nexus 7, Nexus 9, Nexus 10, OnePlus One, and more.

The installation process of the ROM is the same. Turn the phone off, boot into recovery, wipe data if you are coming from another ROM and flash the zip file. However, this time, make sure to flash Gapps and the SuperSU file before you reboot your phone.