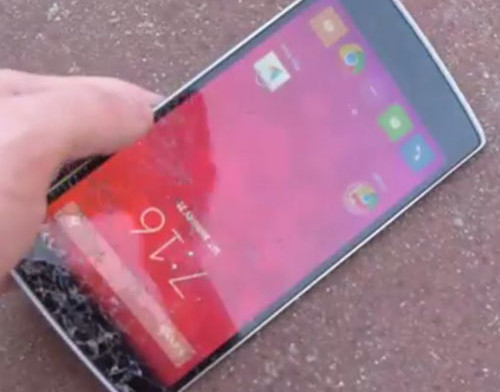 Watch OnePlus One destruction and drop test video and see how the screen shatters and the body of the phone gets nicked and deformed. The OnePlus One is one of the hottest and most demanded phone on the market. It has great specs including Snapdragon 801 chipset, Full HD 5.5″ screen, 3 GB RAM and a huge 3100 mAh battery.

Phones with these specifications cost a lot, usually more than $600. But the OnePlus One is very cheap and has a price tag of around $350 which is lower than even the price of Nexus 5. Because it is so cheap and has good specifications, many people want the phone.

But because of  the high demand, the company can’t produce so many units and so, getting a OnePlus One is a very difficult task to do. While many people are waiting to buy and get their hands-on a unit, someone has already received the phone and has performed the drop test where the phone gets destroyed.

The OnePlus One has great build quality. It has a soft feeling back cover which is very sturdy. But how does it stand against the drop test? The guy dropped the phone on its side first. The screen didn’t crack but the sides received some scratches and nicks but nothing major to concern.

Then, the phone got dropped on its face. As expected, the OnePlus One screen got totally destroyed and shattered. The buttons were still working but the screen was dead. The phone didn’t recognize any touches. The digitizer stopped working while the display was half-destroyed. No matter how sturdy your phone is, always put on a case.