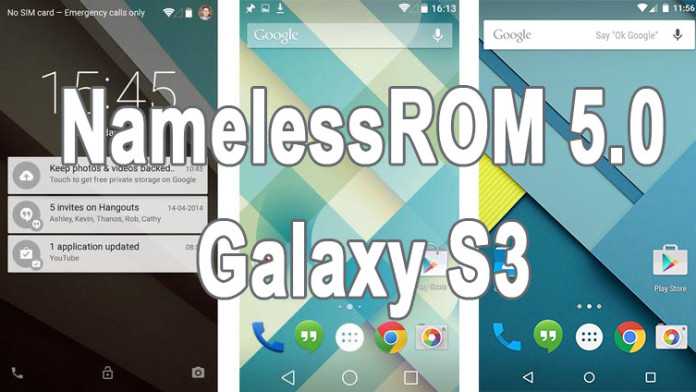 There have been a lot of custom ROMs for the Samsung Galaxy S3 which are based on Google’s latest version of Android, 5.0 Lollipop. A lot of devices like the S3, Xperia and Nexus have received 5.0 Lollipop builds.

But looks like the Samsung Galaxy S3 is getting a lot of love when it comes to Android 5.0 Lollipop ROMs. At first, we saw a very buggy Lollipop ROM based on AOSP sources. It was buggy and nothing was working.

Then, an unofficial build of CyanogenMod 12 got released. It was a much better version compared to the first ROM. It had the original launcher of Android 5.0 Lollipop with white background, notification panel and the easter egg.

Still, there were a lot of bug such as WiFi, Bluetooth, mobile data, RIL and phone calls not working and missing Gapps. Today, we have another ROM based on 5.0 Lollipop called the NamelessROM.

The NamelessROM is a lot better than previous ROMs that we have already covered. WiFi, Bluetooth, mobile data, phone calls and RIL work without any problems. The stock browser can be used to browse the net without force closes.

Most importantly, NamelessROM supports Google apps (Gapps). So you can enjoy all the Google apps on your Samsung Galaxy S3 with Android 5.0 Lollipop. Some of the apps installed are Gmail, Google+, YouTube, Play Store and more.

Once you reboot your phone, the boot animation will last for a few minutes. When it boots up, it will have all Google apps and you can connect to the internet.