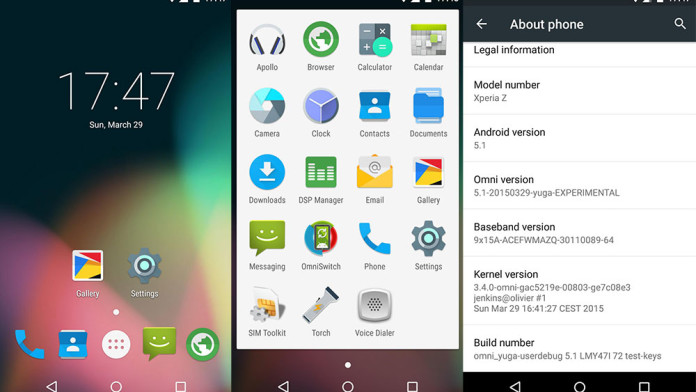 Sony has announced that a wide range of Sony Xperia Z devices will be blessed with the Android 5.0 Lollipop update in the following days and weeks. The update will contain the new Android version and all the Sony exclusive applications like Walkman and X-Reality. While this is a good thing because Sony users will be able to finally enjoy the official and stable Lollipop experience on their devices, Sony is late to the game.

Google has already released another Lollipop update increasing the version number to Android 5.1 while the Sony Xperia Z is still living on 4.4 KitKat. Luckily, the developers of the Sony Xperia Z are not behind software updates like Sony. Their hard work has produced new ROMs based on the latest version of Android.

OmniROM is one of the most popular ROMs based on stock Android, alongside CyanogenMod and Paranoid. The Android 5.1 build for the Sony Xperia Z is currently unofficial. Still, the ROM works perfectly fine most of the time with no major bugs.

According to the developer, the only known bug at the moment is the inability to play videos with the video player. Other than that, users have reported no problems.

Now reboot your phone and enjoy Android 5.1 Lollipop experience on your Sony Xperia Z. You will notice that the phone does not have root access. Do not worry. You have to manually root it. Luckily, it is very easy.

How To Root Xperia Z With Android 5.1

Now your phone will have a rooted Android 5.1 ROM.