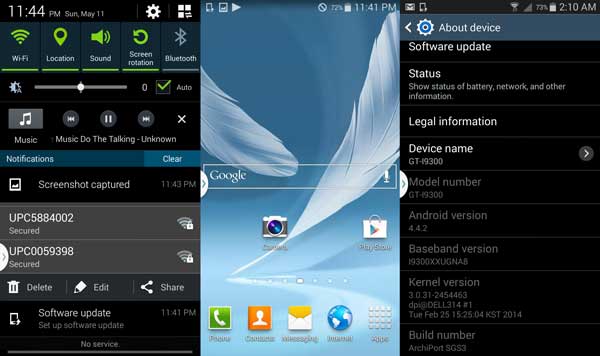 The Samsung Galaxy S3 has just received its first Android 4.4.2 KitKat Touchwiz custom ROM. This is the ported version of the KitKat firmware for the Galaxy Note 2. The developer of this port is JustArchi, the famous developer who has created ArchiDroid ROM for many Galaxy devices.

When Samsung announced that it won’t be releasing KitKat update for the Galaxy S3 it made a lot of noise. Samsung was teasing S3 users for months and now, it says that the update has been cancelled. This thing left many users disappointed and don’t forget that the S3 user base is one of the biggest at the moment.

The port, named ArchiPort is considered as unstable which means it has a lot of bugs and problems. But if you want to try it out and enjoy KitKat Touchwiz, you can do so. One thing to note is that you won’t be able to install custom kernels. You can, but they won’t work and if you flash one you might brick your device.

Users who have tested out the ROM already has sent very good feedback which is surprising considering the developer says the ROM is unstable. Download KitKat Touchwiz Port ROM for Galaxy S3 here.