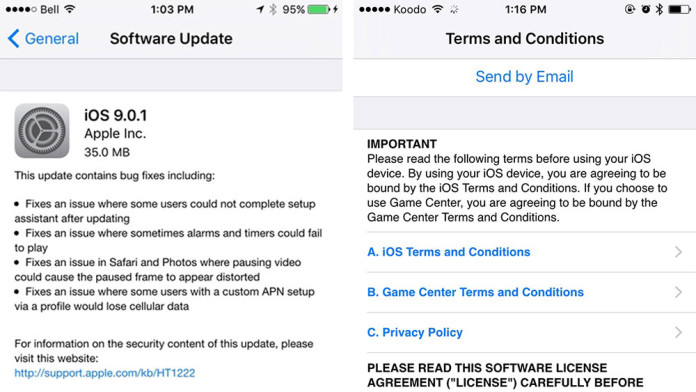 It has been just a couple of days since Apple started releasing the public version of iOS 9 for all supported phones. iOS 9 comes with a number of improvements, mainly under-the-hood which increase performance and add new features.

But as with every early release, there are bugs that users happen to find randomly. A lot of users who updated to iOS 9 reported various issues with their devices. Apple has listened and it is now rolling out an update with version number 9.0.1.

That 0.1 means that it is a minor iOS upgrade but fixes important bugs. According to the change list, iOS 9.0.1 contains various bug fixes. iOS 9.0.1 fixes an issue where some users could not complete setup assistant after updating and an issue where sometimes alarms and times could fail to play.

There was also an issue in Safari and Photo where pausing a video could cause the paused frame to appear distorted. This has been fixed, as well as an issue where some users with a custom APN setup via a profile would lose cellular data.

Since it is a minor update, iOS 9.0.1 comes at 35.0 MB and can be downloaded through OTA. Head over to settings and check for a software update. There are no words about the Siri security lock screen issue which allows users to gain access to private information by using Siri.