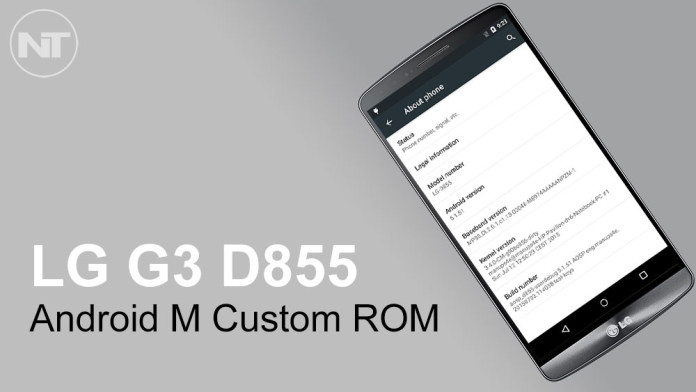 Google hasn’t even released the official Android M update for its Nexus devices and other manufacturers, yet the LG G3 has received an Android M custom ROM. Before you get too excited, it is a custom ROM based on the latest Android M Developer Preview build. It is by no means stable or ready for daily usage.

In fact, it is far from stable. According to the person who created the ROM, manups4e, the Android M ROM is existing just to tell people that the LG G3 can indeed run a stock version of Android M. The developer released the ROM just yesterday and it is a good thing that it even booted up.

Bluetooth, camera, radio, data, double tap to sleep, and sensors do not work. WiFi can be activated but the phone cannot connect to a network. Everything else is working, including audio and double tap to wake feature.

A lot of work has gone into this ROM, to give LG G3 the opportunity to enjoy a piece of Android M, even though not officially. The kernel and ramdisk are highly modified in order to make the Android M ROM boot on the LG G3.

The ROM is on its early stages, so do not expect many things to work, though the creator has stated he is working on improving the ROM, adding Android M features and making more things work.

If you want to see how the ROM runs on your LG G3, make sure you have a custom recovery to flash the ROM. Before flashing the ROM, make a full backup so you can easily restore later, since the Android M ROM is not stable and is for testing purposes only.

Also check out this guide to install TWRP custom recovery on your LG G3.

Wait for the phone to install the Android M Developer Preview ROM and then reboot your phone. If you installed it, let us know how the Android M experience on the LG G3 is.