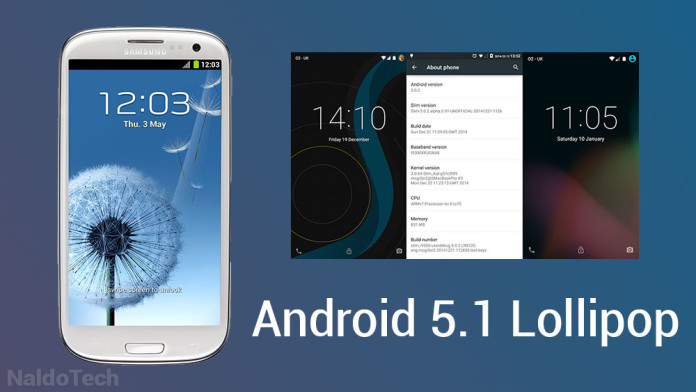 Android 5.1 is the latest release by Google. It has been announced just a few days ago and Google has already updated its two flagship devices, the Nexus 6 and Nexus 9. Other manufacturers are expected to update their devices shortly after, including the Samsung Galaxy S6 and HTC One M9. It is said that both of the devices will have an Android 5.1 Lollipop update ready to go when they get released to the market.

One device that is fighting its death is the Samsung Galaxy S3. Released back on 2012, the phone never really received a huge support from Samsung, primarily for the reason that it only had 1 GB of RAM and that wasn’t enough to support upcoming software updates.

But we all know that this wasn’t the case. The Galaxy S3 continued to receive software updates, even though not officially from Samsung. Developers did a great job creating ROMs based on the latest version of Android for this device. Throughout these months, we have seen a large support for the phone and multiple ROMs based on Android 5.0 Lollipop got released.

Now, one of the most popular custom ROMs, OmniROM has come once again to the Galaxy S3 featuring Android 5.1 Lollipop. Senior member “mcgi5sr2” has developed and created a working Omni build based on Android 5.1 Lollipop. As expected, the ROM is in alpha stage. Nonetheless, most of the things are working without any problems.

Early adopters have reported very good feedback with the ROM being snappy, smooth and with great battery. At least, better battery life than previous ROMs.

OmniROM aims to bring a slimmed down experience of stock Android 5.1 firmware. Everything is exactly the same but faster and better.

Charge your phone to at least 60%. While the process doesn’t take more than a few minutes, the phone can freeze. If it turns off, it can get damaged.

Now that you have successfully flashed the Android 5.1 Lollipop ROM and Lollipop Google Apps on your Samsung Galaxy S3, reboot it and enjoy the new features and options of the latest Google’s release.