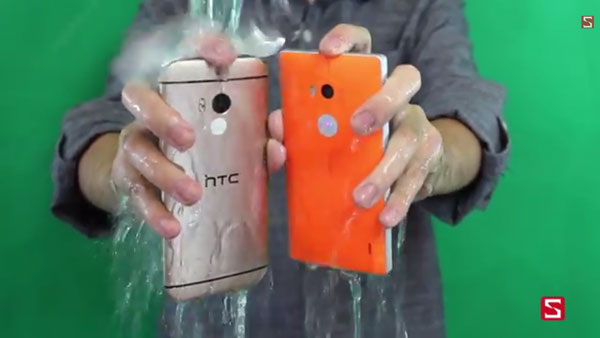 Two days later, two of the smartphones happily accepted the challenge. The One M8 and Lumia 930 took the ice bucket challenge with a bowl of water filled with ice even though they aren’t water-resistant like the Samsung Galaxy S5. Surprisingly, both of the phones successfully passed the test.

The only phone which didn’t accept the challenge is the iPhone 5s which was also nominated by the Galaxy S5. The HTC One M8 is actually IPX3 certified which means it doesn’t have any protection against dust but it can handle some water splashes.

On the other hand, the Lumia 930 and iPhone 5s do not have any kind of certification which means they are not water and dust resistant. The Galaxy S5 didn’t nominate the Sony Xperia Z2 because it is IP58 certified. This makes the Xperia Z2 even more water-resistant than the Galaxy S5.

If you don’t know what ALS Ice Bucket Challenge is, it is a challenge created to raise awareness of ALS disease which is a motor neurone disorder. There is no cure for this disease, that’s why the challenge has been created, to raise the required funds from the donations to find a cure.