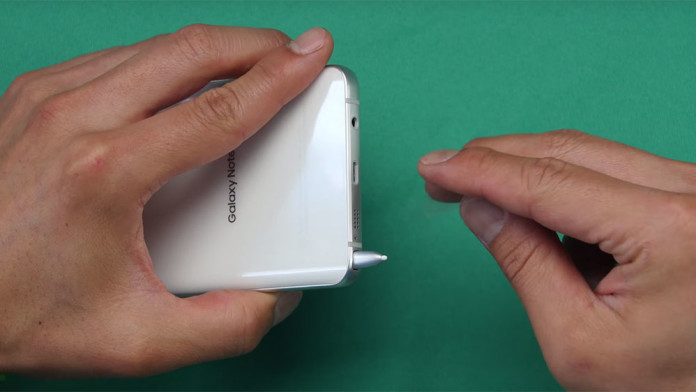 There is a new issue going around called SPenGate or PenGate after a few users tried to insert the S-Pen backwards on the Samsung Galaxy Note 5. Unlike previous Note versions, you can actually insert the S-Pen backwards on the Note 5. On previous versions, the head of the pen was bigger than the port. Since the Note 5 has a new pen mechanism where you have to click to release it, you can insert it in both ways.

Everything sounds good so far, but there is an issue. If you insert only an inch of the pen backwards into the Galaxy Note 5, there won’t be any issues. The pen can be easily pulled out. But if the pen is inserted all the way in, it will get stuck. There is a small plastic part inside the pen compartment which detects whether the pen is inside or outside the phone.

This is the part that makes Air Command possible. If the pen is inserted the wrong way, the top of the pen will get stuck, and if you force the pen out, it will actually break the small plastic part. The phone will work fine but you will no longer get the awesome features.

If you got you S-Pen stuck on your Samsung Galaxy Note 5 and haven’t applied any force to pull it out, you can easily get the pen out without breaking the pen detection mechanism. All you need is a piece of paper. Cut a piece of paper. It needs to be long, longer than the S Pen. It also needs to fit inside the S-Pen hole.

This is a very simple solution to pull the pen without breaking the S-Pen detection mechanism. Basically, the paper pushes the plastic part in, allowing the pen to freely go out. You can check out the video for more information.