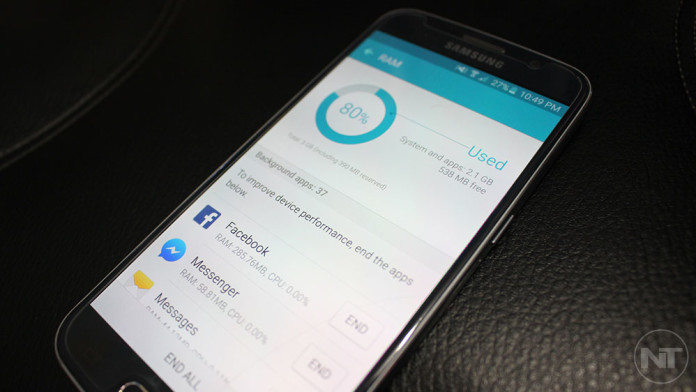 After the Galaxy S6, S6 edge and Galaxy Note 4, the Galaxy Note 5 is the next Samsung phone to suffer from poor RAM management issues. Even though the gigantic phablet from Samsung comes with 4 GB of RAM, it doesn’t look like they fully work. You can test the true multitasking power of the Galaxy Note 5 by opening two applications at the same time using the Multi Window feature. The phablet doesn’t slow down a single bit while running two, three or even four applications at the same time. At the end, that’s what 4 GB of RAM are for.

But if you only use one app at the same time, close it, open another one and then switch to the previous app, you will have to wait for the app to reload. Apparently, it has been found that the Samsung Galaxy Note 5, just like the Galaxy Note 4 and Galaxy S6 aggressively closes tasks in the background.

Basically, if you open and close more than 5 apps, the phone will automatically close them and you won’t be able to continue from where you left. On a speed test against a 3 GB RAM phone, the Note 5 lost just because it had to relaunch the apps from the beginning.

Again, this has to do with the TouchWiz firmware because 4 GB of RAM should keep a lot of applications open and running in the background. Luckily, a few readers over at NaldoTech reported that the RAM solution for the Galaxy S6 also works on the Galaxy Note 5 since both firmwares are very similar.

As usual, every time you have to modify system files on your Android phone, you need to have root. If you haven’t rooted your phone, read this guide on how to root Samsung Galaxy Note 5. Now that you have access to root, download ES File Manager from the Play Store.

Now save the new build.prop file and reboot your phone. While RAM usage will stay the same, the phone will no longer aggressively close tasks in the background.