How to Enable Battery Percentage on Android KitKat 4.4 Without Root 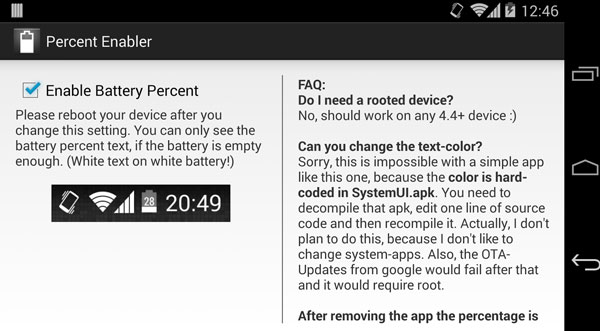 You can now enable the battery percentage inside the battery indicator on every unrooted Android KitKat 4.4 device. Android offers amazing possibilities to customize different devices. Custom ROMs, kernels and mods are what make Android devices special and interesting. However, in order to install mods and ROMs the phone has to be rooted which unfortunately voids warranty and many people don’t want them.

Sometimes, even simple mods such as enabling battery percentage near or inside the battery indicator requires root. Thankfully, an app has been developed which takes care of this problem on all Android 4,4 KitKat devices. The app is called “Battery Percent for KitKat” and the best thing is that it doesn’t require root access, a big plus for all people who don’t want to lose warranty.

Simply download the app, open it and there you’ll see an option called “Enable Battery Percentage”. Enable it and then reboot your phone. Once your phone is fully booted, you will be able to see the battery level. Now you can uninstall the app if you want because it only changes a system setting and doesn’t show the percentage itself.

One thing to note is that you won’t be able to see the level if battery is full because both percentage and battery indicator are white. The color can’t be changed because then it would require root access.