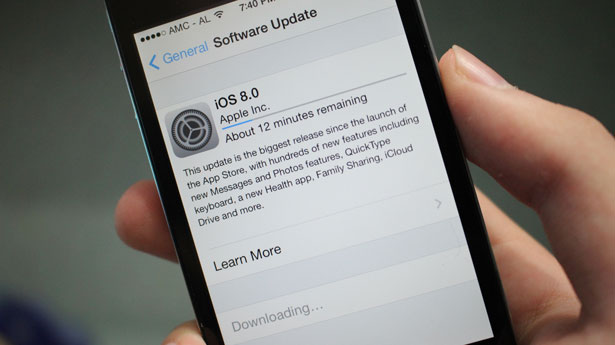 How to download and install final official iOS 8 update on your Apple device. Apple announced iOS 8 a few months ago and it brings a lot of improvements, changes and enhancements. Most of the changes are under the hood which means a lot of features have been added.

But the user interface is almost the same. iOS 8 is focused on bringing more features than having a new UI like iOS 7. So, the UI of iOS 8 is basically the same as iOS 7 UI with a few graphical changes that most of the user will not even notice.

Apple said that it will be releasing the final version of official iOS 8 update on 17 September. The day has come and now the update is seeding on all supported devices including the iPhone 4s, 5, 5s, iPad 2 and later. There are two ways of updating your iOS device to the latest and greatest iOS 8: OTA and iTunes.

Updating through OTA is the easiest and fastest method of downloading and installing iOS on your phone.

1. Turn your phone on and go to Settings.

2. Scroll down and go to General.

3. To check your current iOS version go to About. Tap on Software update to check for new version.

5. Your phone will reboot a few times to finish the installation process.

Also Read: How To Change Siri Voice Gender From Female To Male iOS 7 & 8

iTunes is another way to update your iPhone or iPad but it is more complicated than OTA. You need to open the iTunes program, connect your phone to your computer with a USB cable and then press the Update button. iOS 8 will download and then it will install on your phone.