How To Disable Next Word Prediction on iOS 8 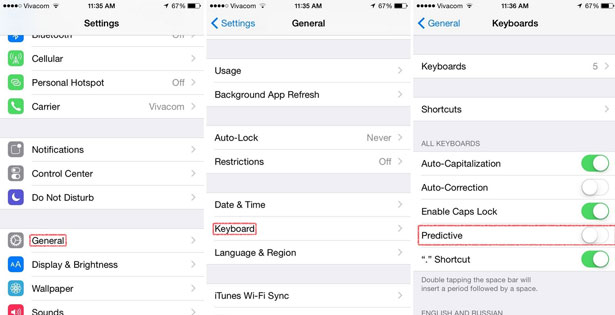 The new iOS 8 update brings a lot of improvements over iOS 7. For a normal user, there’s not much that has changed but for someone who knows about smartphones knows the real deal.

While iOS 8 isn’t a complete change like iOS 7 was, it brings a lot of options and features that the previous version didn’t have. So this update is more for features than user interface.

Also Read: How To Update Your iPhone To iOS 8.0.2 To Fix Bugs

One of the new features is word prediction. No, it is not the same as the infamous auto correct. Auto correct, as the name says, automatically corrects every single word you type in. If you type a word and there is a mistake, auto correct will change it into a similar word.

This is supposed to help the user but most of the times it just fails, terribly. Word prediction however is a completely different story. Instead of correcting what you are writing, it suggests you what words to type.

This feature has a memory and stores everything you write except passwords and account details for obvious reasons. Later, if you are writing the same sentence and are in the middle of it, a few words will show up above the keyboard. You simply tap the word and it automatically enters into the message. It is a handy feature that many people love.

But sometimes it can be annoying because it takes a good part of the screen. If you don’t want the feature, you can easily disable next word prediction feature from the Settings menu on iOS 8.

Also Read: How To Install & Switch To iOS 8 Third-Party Keyboards

Go to Settings > General > Keyboard and turn Predictive option off. That is it. Now the keyboard will not show predicted words anymore.