Fake ID is a new vulnerability on Android discovered by Bluebox labs. It is a dangerous bug and can affect every Android device. It is a big concern for those  devices with old Android version that no longer receive firmware updates.

The “Fake ID” vulnerability affects the way Android processes the digital signature identities attached to apps from a handful of vendors. The operating system is configured to automatically accept apps from certain vendors like Adobe apps. Those apps also can automatically plug into other apps and devices hardware, that other apps can’t do.

Also Read: How to Check If Your Device Is Affected By Heartbleed OpenSSL Bug 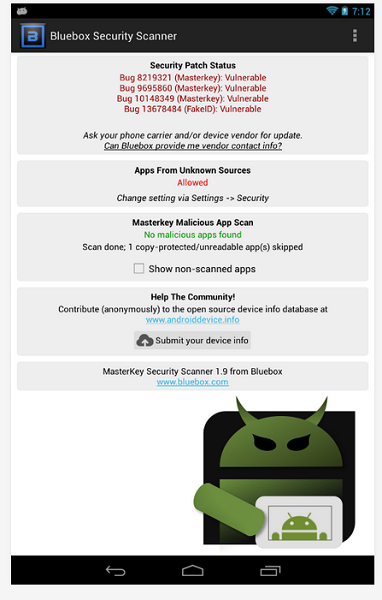 Also Read: How To Fix Fake ID Vulnerability On Android

Bluebox has created an app so you can scan your device and to detect if your system is vulnerable. It is called Bluebox Security Scanner. It is available on the Play Store and can be downloaded here.